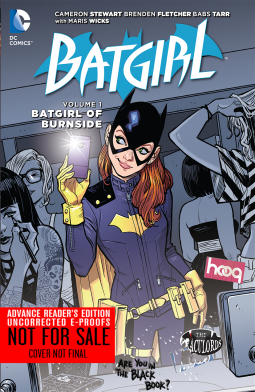 From the publisher: It’s a reinvention of Batgirl from the boots up, focusing on Barbara Gordon’s amazing eidetic memory and how she balances her dual lives—one as a masked hero and the other as a grad student.

Let me first say that I enjoyed the previous collections of DC's New 52 Batgirl. I felt like they captured Barbara Gordon's voice extremely well, and put Batgirl through the ringer, while staying true to who she is. The tone was also consistent with the Batman family of books, yet uniquely her own. The new collection, Batgirl Vol. 1: Batgirl of Burnside, by Cameron Stewart, reinvents Batgirl/Barbara Gordon yet again. I don't know that it was a necessary move (I can't really see Batman making an appearance in this book), but it works for what it is.

Barbara Gordon moves to a new suburb of Gotham called Burnside. She has been accepted into a collegiate program based on an algorithm she developed. She is living with a friend she met during her stint in rehab which was a result of being shot by Joker. Her roommate is programing the newest social media hit, HOOQ (a sort-of dating app). She also meets a several new friends through her college work, one of whom helps to develop tech for Batgirl. Additionally, Dinah Lance (Black Canary) crashes with Barbara. Throw into the mix a Batgirl impersonator, Burnside's obsession with their new resident hero, Barbara's chaotic social life, and an surprising villain, and you have the new direction for Batgirl.

I'm not really the target audience for this new Batgirl. That being said, I believe this book will be hugely popular with it's audience. Stewart writes Batgirl from the perspective of Barbara Gordon as a fairly typical twenty-something, dealing with many of the typical twenty-something issues. Gone is the underlying darkness that lingered in previous collections. Instead, a lighter tone and spunkier heroine take its place. Additionally, the art serves as a great complement to the story, with brighter colors and a funky style that suits the new direction.

Batgirl Vol. 1: The Batgirl of Burnside should find an audience fairly easily. The character and tone serve to set it apart from other books currently available, and may even bring new readers to comics. While this book isn't for me, I would readily recommend it to readers looking for something different, possibly even trendy.