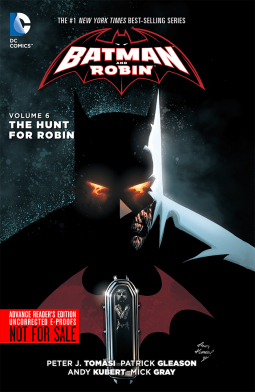 From the publisher: After losing his son Damian—a.k.a. Robin—Batman has finally found peace with his death. Damian's grandfather Ra's al Ghul, however, has not. In order to resurrect Robin, he's stolen the body and now Batman will stop at nothing to reclaim him.

Peter J. Tomasi has done a great job with the latest Batman and Robin book, Vol. 6: The Hunt for Robin. After Damien Wayne, Robin, was killed, Bruce Wayne struggled to come to terms with his death, including getting over any attempts to resurrect him. Just when he was beginning to move on, Bruce discovers that the bodies of both Talie al Ghul and Damien have been stolen by Damien's grandfather, Ra's al Ghul. What follows is Batman's attempt to recover the bodies, Damien's in particular, before Ra's can resurrect them to help him in world domination. With assists, and opposition, from various Justice League members and Frankenstein, Batman chases Ra's around the globe. Eventually reconnecting with Red Robin, Red Hood, and Batgirl, Batman makes a decision that could result in long-term ramifications.

Knowing that no one really stays dead for long in comics, I was curious how Tomasi would go about bringing Robin back. There was real emotional depth in Damien's death and how Bruce and the rest of the Bat-family dealt with it. One of my favorite recent stories involved Dick Grayson processing through the death of Damien Wayne. So Tomasi had the challenge of making this a story worthy of the weight it would carry. For the most part, he succeeded. This particular volume did not provide the resolution to the whole story of Damien's resurrection, but it provided a strong beginning. Involving the various Bat characters was a wonderful decision, as this seemed to add to the depth needed.

I would highly recommend Batman and Robin Vol. 6: The Hunt for Robin, by Peter J. Tomasi, to all Batman fans. This isn't the best place for new readers to begin, but the general background knowledge needed to understand what is happening is provided. I look forward to following the rest of this story to see how Tomasi wraps it all up.

I received a preview copy of this book from DC Comics and Netgalley in exchange for an honest review.
Posted by Scott at 7:58 AM