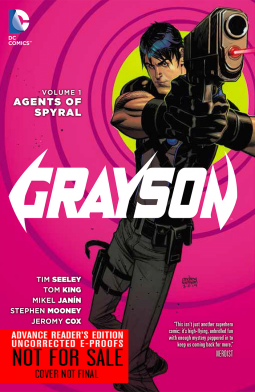 A thrilling new chapter of Dick Grayson's life begins here. A super-spy espionage thriller that will shock you and prove one thing: you might think you know Nightwing--but you don't know Dick.

Collects GRAYSON #1-4, GRAYSON ANNUAL #1 and a story from SECRET ORIGINS #8.

Grayson, by Tim Seeley, is a blast. As much as I enjoyed Nightwing, the series and the character, Grayson is a natural evolution for the character coming out of the Forever Evil event.

When Dick Grayson was revealed as Nightwing to the world at large, it was bad. When it appeared that he was killed, it was worse. Now, only Batman knows that Dick is alive and he has given him a mission: Infiltrate Spyral, a secret, spy-type organization with evil tendencies. Dick is also to discover the identity of Spyral’s mysterious leader, Mr. Minos. Renamed Agent 37, Dick is sent on missions to retrieve parts of Paragon that have gone missing around the world.

Seeley does a great job of capturing the essence of Dick Grayson. He has always been the light to Bruce Wayne’s darkness, and this series continues that. Dick takes great joy while on his missions, reveling in the acrobatics and physical challenges. His wit is as clever as ever, also.

Helena Bertinelli (code-named Matron) makes her New 52 appearance as headmistress of St. Hadrian’s Finishing School, a school that trains young women as spies/assassins and a Spyral cover organization.  Midnighter is also involved on the periphery, which is interesting since the character originally began as a Batman archetype. The previously mentioned Mr. Minos, the director of Spyral, figures prominently as well. The discovery of who he actually is is one of the central mysteries Dick is trying to solve.

I want to make special mention of the covers for Grayson. They are pretty cool and very reminiscent of tv shows like The Avengers and The Prisoner, and 60’s James Bond.

I highly recommend Grayson, by Tim Seeley. This is a fun and entertaining book. It combines superhero action with James Bond-type spying, with a light and enjoyable tone.

I received a preview copy of this book from DC Comics in exchange for an honest review.
Posted by Scott at 7:11 AM