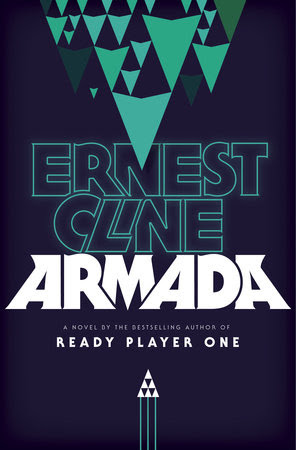 From the publisher: (Hold tight, this is a long one) Zack Lightman has spent his life dreaming. Dreaming that the real world could be a little more like the countless science-fiction books, movies, and videogames he’s spent his life consuming. Dreaming that one day, some fantastic, world-altering event will shatter the monotony of his humdrum existence and whisk him off on some grand space-faring adventure.

But hey, there’s nothing wrong with a little escapism, right? After all, Zack tells himself, he knows the difference between fantasy and reality. He knows that here in the real world, aimless teenage gamers with anger issues don’t get chosen to save the universe.

And then he sees the flying saucer.

Even stranger, the alien ship he’s staring at is straight out of the videogame he plays every night, a hugely popular online flight simulator called Armada—in which gamers just happen to be protecting the earth from alien invaders.

No, Zack hasn’t lost his mind. As impossible as it seems, what he’s seeing is all too real. And his skills—as well as those of millions of gamers across the world—are going to be needed to save the earth from what’s about to befall it.

It’s Zack’s chance, at last, to play the hero. But even through the terror and exhilaration, he can’t help thinking back to all those science-fiction stories he grew up with, and wondering: Doesn’t something about this scenario seem a little…familiar?

At once gleefully embracing and brilliantly subverting science-fiction conventions as only Ernest Cline could, Armada is a rollicking, surprising thriller, a classic coming of age adventure, and an alien invasion tale like nothing you’ve ever read before—one whose every page is infused with the pop-culture savvy that has helped make Ready Player One a phenomenon.

I'm torn with how I feel about Ernest Cline's new novel, Armada. On one hand, I loved his previous book, Ready Player One. It was full of 80's pop culture goodness and was a fantastic story. Armada is also full of pop culture goodness, expanding its scope to include many things from the 60's to today. This is right in my sweet spot. On the other hand, I felt like Armada would drag as I was reading it, unlike Ready Player One. In my opinion, this has more to do with the writing style than the story itself. I'll try to explain.

I like a book that sucks me in and propels me through the story. Large/long paragraphs (especially when they come frequently) tend to slow me down, often grinding the flow of reading to a halt. I feel like this is the biggest issue with Armada. The story was interesting: Teenager discovers his knack for video games makes him perfectly suited to fight an upcoming war against aliens bent on destroying the earth. The most frequent comparison is to the movie The Last Starfighter, which I enjoyed. I liked the characters, for the most part. The ideas were pretty interesting; at the very least they were fun. There were a few twists as the story made its way to the end which kept it from being too standard. Even the frequent pop culture mentions, which many readers felt were forced in Armada, didn't really bother me. It was just the pages heavy with exposition, rather than dialogue, that kept forcing me away from the book. I never reached the point where I just couldn't put the book down. Maybe the biggest issue is that Armada isn't Ready Player One.

Overall, I liked Armada. Ernest Cline is a fine writer and I enjoy his particular use of 80's geek culture. I'll continue to read his books in the future, trusting him to provide entertainment and a quality story.

I received a preview copy of this book through the Blogging for Books program in exchange for an honest review.
Posted by Scott at 7:39 AM