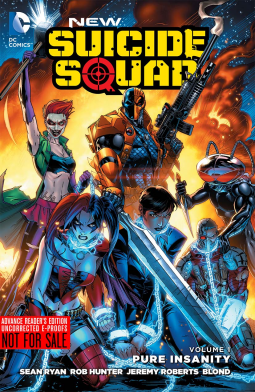 From the publisher: Once a secret to even the highest government officials, the Suicide Squad has emerged from FOREVER EVIL as one of its most popular programs. Its mission: to send incarcerated super villains to carry out impossible missions on foreign soil in exchange for a commuted prison sentence. If they are caught or killed, no government could link these operatives back to the U.S. government. At least, that's the theory.

This new series begins with a mission in Russia that features two red-hot Batman villains: Harley Quinn and Joker's Daughter, plus Deadshot, Deathstroke the Terminator, Black Manta and more.

Sean Ryan's New Suicide Squad is a big, over-the-top action movie, in comic book form. The latest volume includes Amanda Waller having to share control of the squad with Vic Sage, leading to typical Suicide Squad dysfunction. Additionally, the team has two new members, Deathstroke and Joker's Daughter, who aren't being controlled with the traditional bomb in the brain like the rest of the team.  Not to mention, Deathstroke and Joker's Daughter are so similar to Deadshot and Harley Quinn.  Throw in Black Manta for field ops leadership, and you have a giant melting pot of chaos. And this is just the first arc, a mission that takes place in Russia. The second mission inserts Reverse-Flash and Captain Boomerang into the mix, not to mention a lab growing Chinese super-heroes.

New Suicide Squad Vol. 1: Pure Insanity doesn't pretend to be anything it isn't. It's about action, crazy villains in impossible situations, and the resulting mix of chaos that occurs when these elements are mixed.  There is a chance for Ryan to add depth to these characters, but at this point it doesn't seem to be the focus, and that is just fine.

This is a fun book, and it reminds me of seeing a Jerry Bruckheimer movie, lots of excitement and fun, but not much philosophy or commentary on the human condition. Again, this is not a criticism; it's just a big, loud, fun book. I recommend it to readers looking for something easy to read, and different from the traditional super-hero comic.

I received a preview copy of this book from DC Comics in exchange for an honest review.
Posted by Scott at 7:59 AM