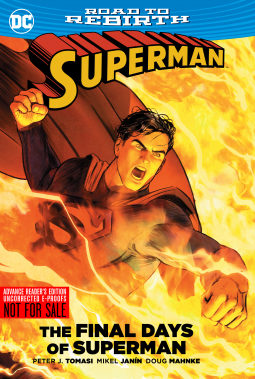 From the publisher: It's a new chapter in the Man of Steel's life that will change everything you know in the epic eight-part SUPERMAN: THE FINAL DAYS OF SUPERMAN, all written by Peter J. Tomasi (BATMAN AND ROBIN)!

Superman... is dying. His never-ending battles have finally taken their toll on Kal-El, and with time short he reaches out to unite his friends and loved ones for what comes next. Meanwhile, a new sinister force's machinations will see to it that Man of Steel will not go quietly into the night, but instead enter into a life and death struggle with another being forged from the very energies of the Kryptonian's solar flare power now claiming to be the true Superman!

SUPERMAN: THE FINAL DAYS OF SUPERMAN ushers in a completely new era for the Man of Steel in an unforgettable graphic novel that is NOT to be missed. Collects SUPERMAN #51-52, BATMAN/SUPERMAN #31-32, SUPERMAN/WONDER WOMAN #28-29, and ACTION COMICS #51-52.

Superman: The Final Days of Superman, by Peter J. Tomasi, is a good book. It is basically the New 52 version of the Death of Superman story; however, rather than Doomsday, there are multiple versions of Superman. This is the collection that paves the way for the Superman Rebirth books.

The story is basically this: with Superman outed as Clark Kent and seriously low on power, he finds himself trying to lay low and discovers he is dying, with no cure. As only Superman can, he makes the decision to continue to help others as long as he is able to. Meanwhile, a mysterious glowing figure is showing up in all of Clark Kent's old haunts, claiming to be Superman. As the true Superman tries to figure out this mystery, he comes into contact with many of his old friends/family, who are also trying to come to terms with his pending death. These include Batman, Wonder Woman, Lois Lane, Supergirl, Lana Lang, and others. The culmination becomes the jumping off point for the new Superman storylines as part of the DC Rebirth event, particularly in the new Trinity comic.

I found The Final Days of Superman entertaining and a solid read. I wasn't a big fan of the New 52 version of Superman, at least in his own books, but I enjoyed the character as he was presented here. I also liked how Clark had the chance to speak with many of his friends and inform them of his condition. Batman, in particular, was very interesting to watch deal with this and realize not everything is a problem to be solved. Tomasi did a fine job weaving in the many characters and their personalities, while telling a good story.

This story was interesting enough that I will most likely read some of the Superman Rebirth books to see how things progress. I would definitely recommend Superman: The Final Days of Superman to Superman fans, and would also suggest it to readers looking for a solid story about the mortality of heroes.