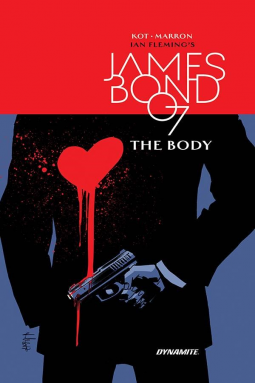 From the publisher: As Bond undergoes a post-mission medical examination, he relays the story of his previous mission to the examiner. Each cut, bruise, and broken bone connected to a specific event of the mission. A connection is made between two people with different purposes: one to save lives, the other to take them.

PART TWO - THE BRAIN James Bond leads the interrogation of a scientist who allowed a lethal virus to be stolen. But when the investigation takes a surprising turn, Bond begins to question whether he is enough.

PART THREE - THE GUT One sauna. Twenty Neo-Nazis. One Bond. James Bond. This weapons deal won't go according to plan.

PART FOUR - THE HEART On the run from a lethal antagonist, weaponless and wounded deep in the Highlands, Bond finds solace with a woman who exchanged her job as a doctor and a life in the city for a cottage and solitary life of a writer.

Can Bond find a quiet peace unlike he has known before or will his life choices catch up with him? AND MORE..

James Bond: The Body by Ales Kot is the latest in Dynamite Entertainment's all-new James Bond mini-series/collected editions. They have all been good, and a couple of them I would even consider great. They have done a fine job of updating Bond to our current times, but keeping the spirit of Ian Fleming's original books. With The Body, Kot adds to this legacy with a fresh take on who Bond is. In this case, the story starts with Bond coming in for a routine physical/medical treatment after his latest adventures. The doctor observes his many scars and suggests that each tells its own tale.

Kot goes about telling his story in an episodic manner. Each chapter shows Bond on a different mission, yet by the end, they all pull together to show one cohesive plot that needed to be stopped. I thought this was a nice change from the more traditional longer story arc, as each chapter tells a complete story. This approach forces Kot to tell a tighter story, which results in very little, if any, filler. It also allows him to use different tones, ranging from violent anger to quiet contemplation. This presents us with a well-rounded James Bond, and I've always appreciated a deeper approach to the character. We see Bond a whole person, with both strengths and flaws, and Kot does a terrific job of balancing both. Additionally, each issue is drawn by a different artist, which further differentiates that each chapter is its own piece of a much larger story.

Overall, I found James Bond: The Body by Ales Kot to be an entertaining and fun Bond story that felt like one of Fleming's, which is a high standard. It is self-contained, so prior knowledge of previous series is not necessary, but a familiarity with the character adds to the level of enjoy. I will make one observation, though. The story was advertised as presenting a stories that coincided with Bond's scars; however, to my knowledge, that idea was only addressed at the very beginning and used as a springboard for the reader into the story as a whole. That doesn't change my thoughts on the book, but it could be misleading.

I received a preview copy of this book from Dynamite Entertainment and Netgalley in exchange for an honest review.
Posted by Scott at 11:01 AM