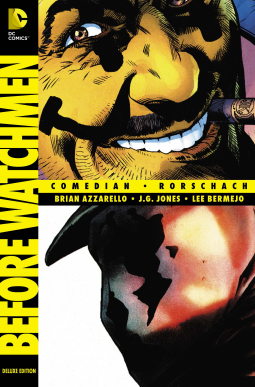 From the publisher: The controversial, long-awaited prequels to the best-selling graphic novel of all-time are finally here: BEFORE WATCHMEN! For over twenty years, the back stories of the now iconic characters from Alan Moore and Dave Gibbon's landmark graphic novel have remained a mystery, until now. DC Comics has assembled the greatest creators in the industry to further paint the world of WATCHMEN, with this second volume starring two of the most polarizing anti-heroes ever, COMEDIAN and RORSCHACH.

Eisner Award-winning writer and creator of 100 Bullets Brian Azzarello brings his gritty, nuanced storytelling to these two recognizable characters. In RORSCHACH, Azzarello again teams with superstar artist Lee Bermejo (JOKER, LUTHOR, BATMAN/DEATHBLOW) to illustrate how one of most dangerous vigilantes the comic world has ever seen became even darker. COMEDIAN, featuring art by J.G. Jones (FINAL CRISIS, Wanted), plants the famed war hero within the context of American history, as we find out how the Vietnam War and the Kennedy assassination revolve around him.

This was a great collection of stories.  Brian Azzarello is one of my favorite writers and he did a great job with both Rorschach and The Comedian.  He added depth and insight into both of these characters (I hesitate to say heroes).  Both of these series were worthy of the Watchmen legacy.

The Comedian story added a lot to a character that is really hard to like.  He is vulgar, coarse, crude, unsympathetic, and inappropriate at best.  Somehow, though, Azzarello added some empathy.  The story centers on Eddie Blake's (The Comedian) relationship with the Kennedy family (yes, those Kennedy's) and his time in Vietnam.  While not excusing or justifying his actions, the reader begins to understand why Blake  does what he does.  I felt like this gave me a new perspective on Blake, yet was still consistent with the character as he was originally written.  The story also dovetails nicely with several of the other prequel stories, particulary that of Ozymandias.

Rorschach is probably the most popular of the original Watchmen characters.  He is gritty, dark, and unapologetic, but maintains a very strict code of morals and ethics, almost to the extreme.  Azzarello goes further into his background, adding humanity and feeling to the character.  The story deals with Rorschach's relationship (such as it is) with a waitress at a diner he frequents, while he is fighting a drug lord and trying to catch a serial killer.  All the while, more information about his personal life is dropped in.  This was a great story, and added much to the background of Rorschach.

Overall, this was the best of the four Before Watchmen collections.  Top to bottom, it was great.  I highly recommend it.

I received a review copy of this book from Netgalley and DC Comics in exchange for an honest review.
Posted by Scott at 12:33 PM