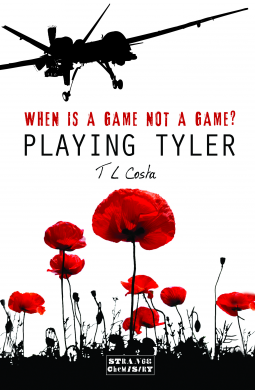 From the publisher: When is a game not a game?
Tyler MacCandless can’t focus, even when he takes his medication. He can’t focus on school, on his future, on a book, on much of anything other than taking care of his older brother, Brandon, who’s in rehab for heroin abuse… again.
Tyler’s dad is dead and his mom has mentally checked out. The only person he can really count on is his Civilian Air Patrol Mentor, Rick. The one thing in life it seems he doesn’t suck at is playing video games, and, well, that’s probably not going to get him into college.
Just when it seems like his future is on a collision course with a life sentence at McDonald's, Rick asks him to test a video game.  If his score's high enough, it could earn him a place in flight school and win him the future he was certain that he could never have.  And when he falls in love with the game’s designer, the legendary gamer Ani, Tyler thinks his life might finally be turning around.
That is, until Brandon goes MIA from rehab and Tyler and Ani discover that the game is more than it seems. Now Tyler will have to figure out what’s really going on in time to save his brother--and prevent his own future from going down in flames.

Playing Tyler by T L Costa is a great new entry into Young Adult (YA) fiction.  It’s a captivating story about Tyler MacCandless and Ani Bagdorian.  Tyler is a teen with ADHD, a heroin-addicted brother (Brandon), a disconnected mother, a dead father, a jones for flying, and tremendous gaming skills.  Into his life steps Rick, a former military man who is mentoring Tyler and teaching him to fly.  Tyler is beta-testing a new flight simulator, a game in which a pilot controls multiple drones and provides air support for missions in the Middle East.  Ani is a Yale freshman, an early high school graduate who both programmed an award winning game and also won the world gaming championship.  She is currently the designer of the sim Tyler is playing, and she is the girl of Tyler’s dreams.  As their relationship begins to blossom, Brandon disappears from rehab, and Tyler begins to have questions about his missions in the game.
Costa’s writing is very easy to read, pulling the reader along with barely any time to breathe.  Alternating perspectives between Ani and Tyler really help to develop characterization and provide insight into actions and motivations.  Both characters are well-drawn representations of teenagers looking for their place in the world and struggling with the newness of a relationship.  I also really like how Tyler’s ADHD is written, often using run-on sentences to show the hyper-activity.  The supporting characters, including Rick, Tyler’s mom, Brandon, and Christy (Ani’s roommate) are all fleshed out enough to help propel the story forward, but never enough to distract from Tyler and Ani.
As a middle/high school English teacher, I’m always on the lookout for something to recommend to my students, and Playing Tyler fits the bill perfectly.  It’s as if John Green channeled Cory Doctorow and wrote Ender’s Game.  This book has it all: action, romance, teen angst, and a struggle with moral integrity against corporate/government/military recklessness.  I highly recommend it.
I received a review copy of this book from Netgalley and Angry Robot Books in exchange for an honest review.
Posted by Scott at 4:52 PM