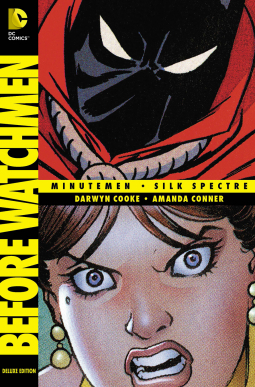 From the publisher: The critically acclaimed and Eisner Award-winning creator of DC: THE NEW FRONTIER Darwyn Cooke lends his talents MINUTEMEN. As the predecessor to the Watchmen, the Minutemen were assembled to fight against a world that have more and more rapidly begun to spin out of control. Can these heroes from completely different backgrounds and with completely different attitudes on crime come together? Or will they fall apart before they begin?

SILK SPECTRE takes an introspective look at the WATCHMEN feature player's struggles with her overbearing superhero mother and her scattered path toward taking the mantle of the Silk Spectre. With gorgeous art by co-writer and illustrator Amanda Conner (POWER GIRL, The Pro), SILK SPECTRE takes a very different perspective at the world of BEFORE WATCHMEN.

This collection is a mixed bag for me.  The Minutemen story is very interesting, adding more depth and background to the original Watchmen book.  The original Nite Owl’s point of view was a nice lens to see the various characters and events from.  There was a lot of behind-the-scenes drama going on that was just hinted at in Watchmen.  Also, it was a nice prequel, connecting just enough to the original to add to the depth of the series.

On the other hand, the Silk Spectre story was just average. The villains, evil businessmen trying to turn hippies into unknowing consumers, just weren’t that engaging.  Lauri’s relationship to her mother, the original Silk Spectre, didn’t add anything to what was previously shown in Watchmen.  I had a hard time finding any depth to this story.

Overall, I recommend this comic to diehard Watchmen fans, but it's really only worth reading for the Minutemen story.

I received a review copy of this book from Netgalley and DC Comics in exchange for an honest review.
Posted by Scott at 11:40 AM