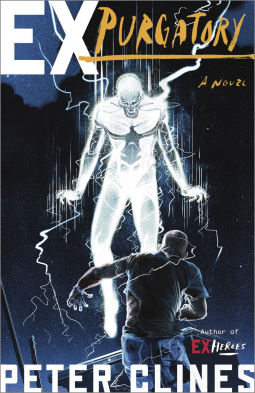 When he’s awake, George Bailey is just an ordinary man. Five days a week he coaxes his old Hyundai to life, curses the Los Angeles traffic, and clocks in at his job as a handyman at the local college.

But when he sleeps, George dreams of something more.

George dreams of flying. He dreams of fighting monsters. He dreams of a man made of pure lightning, an armored robot, a giant in an army uniform, a beautiful woman who moves like a ninja.

Then one day as he’s walking from one fix-it job to the next, a pale girl in a wheelchair tells George of another world, one in which civilization fell to a plague that animates the dead…and in which George is no longer a glorified janitor, but one of humanity’s last heroes.

Her tale sounds like madness, of course. But as George’s dreams and his waking life begin bleeding together, he starts to wonder—which is the real world, and which is just fantasy?

In Ex-Purgatory, the fourth volume of the Ex-Humans series, Cline continues to present an engaging tale of the zombocalypse, with a dash of superheroes thrown in.   However, at the start of this story, the reader is presented with a world where the ex-human virus never hit, and there are no superheroes of any sort.  Following George Bailey (whom we previously knew as the hero St. George)  through his ordinary, workaday life as a maintenance man at a university presents the reader with that classic sci-fi trope, the alternate universe.  George just wants to do his job well, but at night he dreams of grasping hands and gnashing teeth.  During the day, he often mistakes people for shambling monsters of some sort.  Then he meets Madelyn Sorenson, a very pale student in a wheelchair with some strange ideas.  She believes George is a superhero and that he and his friends are needed in another world.  The quest to find them and to discover what is really happening forms the bulk of this volume.

Once again, Cline does a masterful job of telling this story.  All our favorite heroes are present: St. George, Stealth, Zzzap, Cerberus, the Driver, Captain Freedom, and Corpse Girl.  Additionally, the characters are fleshed out even more, which only adds to the depth of storytelling.  Cline continues to come up with unique ways to present villains in this zombie-infested world, and does not rely on simply having the monsters be the antagonists.  At this point, they are more a part of the setting than actual characters, which is a good thing; otherwise these books would quickly become repetitive.  Cline’s spin on the tried-and-true alternate universe trope is fun, and it presents the heroes with yet another obstacle to overcome.  The ending is unexpected, yet all the clues are presented for the attentive reader.

This is a highly entertaining and engaging book.  My only criticism is that it seems to take a bit long for the plot to move past the initial set-up and into the quest to discover the truth.

I once again highly recommend a book from the Ex-Humans series.  Ex-Purgatory is a fun read, particularly for fans of superheroes, zombies, and sci-fi goodness.

I received a preview copy of this book from Broadway Books in exchange for an honest review.
Posted by Scott at 10:24 AM