He Drank, and Saw the Spider by Alex Bledsoe - Book Review 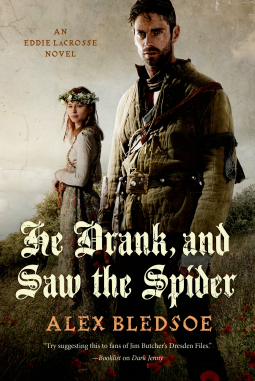 From the publisher: For fans of Jim Butcher's Dresden Files and Glen Cook's Garrett PI novels, comes the newest installment in Alex Bledsoe’s Eddie LaCrosse series, He Drank and Saw the Spider.
After he fails to save a stranger from being mauled to death by a bear, a young mercenary is saddled with the baby girl the man died to protect. He leaves her with a kindly shepherd family and goes on with his violent life.

Now, sixteen years later, that young mercenary has grown up to become cynical sword jockey Eddie LaCrosse. When his vacation travels bring him back to that same part of the world, he can’t resist trying to discover what has become of the mysterious infant.

He finds that the child, now a lovely young teenager named Isadora, is at the center of complicated web of intrigue involving two feuding kings, a smitten prince, a powerful sorceress, an inhuman monster, and long-buried secrets too shocking to imagine. And once again she needs his help.

They say a spider in your cup will poison you, but only if you see it. Eddie, helped by his smart, resourceful girlfriend Liz, must look through the dregs of the past to find the truth about the present—and risk what might happen if he, too, sees the spider.

He Drank, and Saw the Spider, by Alex Bledsoe, is the third Eddie LaCrosse book I've read, and they've all been fantastic.  They are the perfect blend of fantasy, mystery, and humor.

Eddie LaCrosse is a sword jockey, a sort-of private investigator, and knight-errant.  He also has a somewhat mysterious past, and when he finds himself near an area where he rescued a baby sixteen years ago, he feels compelled to see how her life is turning out.  Unfortunately, she is about to become a pawn in a political battle.  Fortunately, Eddie is there to help.  As he follows his instincts and meets all sorts of people, from shepherds to bodyguards, monsters and witches to kings, Eddie slowly unravels the mystery of who Isadore is and why she is so important.

The Eddie LaCrosse novels are very much like Robert B. Parker's Spenser books, in that there is always a mystery, but it is the characters that drive the plot.  Eddie is very similar to Spenser, as well.  He is loyal, tenacious, tough, and a bit of a smart alek, but he has a strong sense of morals and integrity.  He has a group of loyal friends, and his girlfriend, Liz, is a perfect companion for him.  Additionally, Eddie is not a "superman" type character.  He frequently runs into foes he can't overcome with shear strength, and he often ends up injured.

Bledsoe designed the Eddie LaCrosse books to be self-contained stories, but for readers who follow the order of the stories, there are subtle references to previous adventures.  Eddie also shows some nice character development over the course of the books.

The mystery of He Drank, and Saw the Spider is decent, but the true joy of the book, as with all the LaCrosse mysteries, is Eddie and his interactions with the people who make up his world.  Pick up the book for a fun and entertaining journey into hard-boiled fantasy with a cast of characters you'll be anxious to revisit.  I highly recommend this book.

I received a preview copy of this book from Macmillan-Tor/Forge in exchange for an honest review.
Posted by Scott at 6:54 AM