Half Past Danger by Stephen Mooney - Book Review 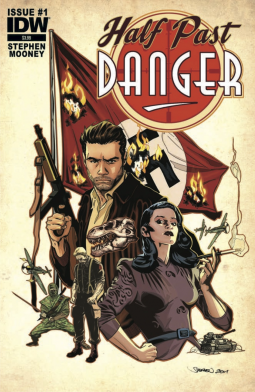 From the publisher: Summer, 1943, and in the midst of a war waged by monsters, Staff Sergeant Tommy ‘Irish’ Flynn never expected to encounter a real one.

But on a remote island in the South Pacific theatre, Flynn and his squad come face-to-fanged-face with creatures long thought dead.

As the world falls apart, a unique set of characters come together:

An embittered Irishman in a war not his own, a beautiful and enigmatic British agent, a U.S. Marine Captain with incredible resilience, and a secret and a mysterious operative from the land of the Rising Sun, all served up in a stew of piping-hot Nazi intrigue.

History meets Prehistory in this two-fisted race against time. And there ain’t no time like Half Past Danger!

Half Past Danger, by Stephen Mooney, is a fun romp in the best traditions of pulp stories.  It sounds like a Saturday afternoon movie: take an Irish sergeant, a female British agent, a super-strong Marine, and a Japanese ninja-type and mix in Nazis and dinosaurs.  This story is nearly all action, with the characters spinning from one crisis to another.  I found it quite entertaining.  While there isn't really any character development (aside from a prologue about Sgt. Flynn), that isn't really the point.  This story is all about action and the good guys trying to save the world from the Nazis, in the vein of Indiana Jones.  However, if Mooney is looking to tell more stories involving these characters, this introduction to Sgt. Tommy Flynn and the rest of the gang is a great starting point.

I recommend Half Past Danger for anyone looking for a quick, fun read, reminiscent of old pulp stories or Saturday afternoon movie serials.

I received a preview copy of this book from IDW in exchange for an honest review.
Posted by Scott at 7:45 AM