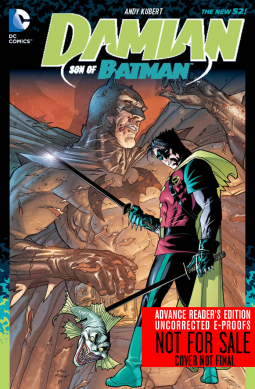 From the publisher: Damian Wayne, the son of Batman, has adopted the cape and cowl as his own...but what horrific events set this troubled hero on the path of his dark destiny? It’s a possible future that may never be in this epic written and drawn by Andy Kubert! Plus, in a tale written by Grant Morrison, Damian Wayne is the Batman of Tomorrow in a story set 15 years from now in a nightmarish future Gotham!

Damian, Son of Batman is an interesting collection.  First of all, the stories are a sort of Elsewhere collection.  The mini-series, by Adam Kubert, takes place in a future where Damian Wayne is still living and playing the role of Robin, Bruce Wayne has retired as the Batman, and Dick Grayson is the current Batman.  It's sort of a Dark Knight Returns vibe.  While tracking the Joker, who is missing, Grayson is killed.  Damian reacts by killing villians in an attempt at revenge and atonement.  He eventually puts on the cowl and assumes the role of Batman. Several familiar faces make appearances, not all in familiar places.

The Batman #666 issue, by Grant Morrison, seems to follow up the mini-series, following the further adventures of Damian as Batman.  In this particular story, Damian is trying to capture a Batman imposter who made a deal with the devil.  Morrison threw in a few creative concepts, but this wasn't his best Batman story.

It was nice to spend a little more time with Damian, due to his recent death in the New 52 continuity.  It was also interesting to see what the future of the DC universe might look like.  I enjoyed seeing Damian becoming Batman and beginning to find out how he would differ from Bruce and Dick. However, these particular stories weren't really anything spectacular.  There were many cool ideas that would serve being expanded upon, but the length of the mini-series and the single-issue story didn't really allow that.

All in all, this was a story for the Batman completest or fans of Damian Wayne. It's a decent collection, but don't expect the Wow factor.

I received a preview copy of this book from DC Comics in exchange for an honest review.
Posted by Scott at 8:38 AM