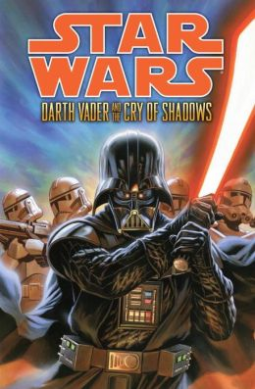 From the publisher: After he is left for dead during the Clone Wars, a single trooper comes to hate the Jedi who abandoned him. Years later, he hears of a great and powerful warrior--the hand of the new Galactic Empire, Darth Vader! Seeking to serve the Dark Lord, this man, Hock, becomes a stormtrooper and works to gain the respect of Vader. During a mission against a group of remnant Separatists, Hock finds himself fighting side by side with Darth Vader, and the bitterness that had grown inside him is brought to rest.

Cry of Shadows is narrated by Hock, a former clone trooper who hates the Jedi, due to the fact they left him for dead during a battle.  As Hock hears rumors and stories about Darth Vader, he decides that Vader is a man deserving of his loyalty and commitment.  He joins the Imperial Stormtroopers and begins to act in such a way as to draw Vader's attention and earn his respect.  This mission culminates during an Imperial attack on a Separatist group located on an out-of-the-way planet.  What occurs is wiped from the Imperial record, and changes Hock's view.

I enjoyed Siedell's spare tale of a man in conflict, looking for a cause worth fighting for.  Hock's background is interesting, and this tale not only provides insight into Vader, but into the life of a clone as well.  It is a nice character study, and serves to further flesh out the picture of Darth Vader as he transitions from Revenge of the Sith to the ruthless leader we meet in Star Wars: A New Hope. It is also interesting to see how the Empire simply alters history to fit what it wants people to know.

I recommend Darth Vader and the Cry of Shadows, particularly to Star Wars fans.  It's a quick and fun read.

I received a preview copy of this book from Netgalley and Dark Horse Comics in exchange for an honest review.
Posted by Scott at 10:51 AM