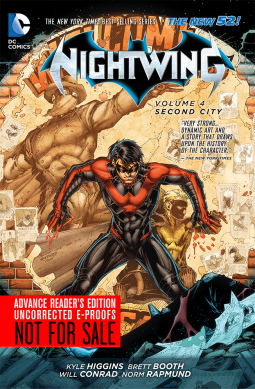 From the publisher: Kyle Higgins sends Nightwing to the Windy City to track down his parent's killer!

After the Joker's attack on the Bat-family, Nightwing finds himself in a new setting with an unlikely ally, The Prankster. Together they are being hunted by the mysterious Mask Killer while Dick tries to find the man who killed his parents, Tony Zullo. Twists and surprises are at every turn in this exciting new chapter of Nightwing!

I really like the story being told in the pages of Nightwing.  In the latest volume, Second City, Kyle Higgins has taken Dick Grayson to Chicago after he received some infomation that Tony Zucco, the man who killed his parents, was there.  What follows is Grayson's search to finally confront and take down Zucco, thereby avenging his parents' deaths.  Along the way, Grayson runs into the Prankster, a vicious villain (or is he) who wants to destroy the mayor of Chicago.

Unlike the other cities in the DC Universe, Chicago is a real place.  What this means is that many landmarks make an appearance, including the Hancock Tower, Navy Pier, Millenium Park, and the El train.  This serves to ground Nightwing in reality much more than some of the other heroes.  It also adds a dimension of fun for people familiar with the city.

Another bonus from having Grayson move to Chicago is the new cast of characters he is surrounded with, including two roommates.  Grayson has lost his fortune, and due to his current relationship with Bruce Wayne, he really doesn't have any access to money.  This puts him in a new position, with the potential to explore new facets of his life.

Storywise, Second City is strong.  Grayson's search for Zucco comes to fruition in an unlikely manner.  Additionally, his run-ins with the Prankster form a solid plot (although a little reminiscent of the movie The Dark Knight) for Higgins to begin Nightwing's career in a new city.

I think my favorite part of this collection, though, are all the hints about what happened to Chicago's masked heroes.  Sometime in the near past, someone killed all, or nearly all, of the masked vigilantes working in Chicago.  Who and why are mysteries definitely worth exploring; I'm also curious about the heroes mentioned, like Slipshift, Ghostwalker, and Aether.  This story clearly demands to be told.

Like the previous volumes in this series, I highly recommend Nightwing Vol. 4: Second City.  A fun and entertaining read.

I received a preview copy of this book from DC Comics in exchange for an honest review.
Posted by Scott at 7:23 AM