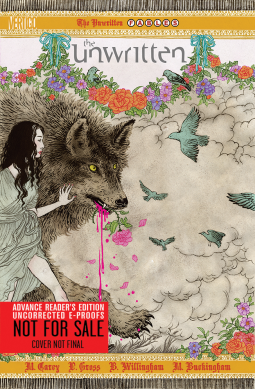 From the publisher: The worlds of FABLES and THE UNWRITTEN collide in the epic comic event by Mike Carey and Bill Willingham!

Tommy Taylor is thrust into the world of Vertigo's hit series Fables! But a dark and terrible foe has seized the fairy-tale homelands and our world. In desperation, the witches of Fabletown gather to summon the greatest mage the worlds have ever seen. But they are in for an unpleasant surprise.

The Unwritten Vol. 9 collection takes two of the most popular and best written (in my opinion) comics that Vertigo is putting out and combines the story being told into one epic crossover.  Mike Carey (The Unwritten) and Bill Willingham (Fables) do a masterful job telling the tale of Tom Taylor's meeting and adventure with the Fables.

The story concerns Frau Totenkinder, Gepetto, Ozma, Prince Ambrose, and the rest of the surviving Fables trying to hold off and defeat Mister Dark, the personification of Fear.  They have lost many of their "big guns" and are left to cast a summoning spell for the greatest, most powerful wizard there is.  Enter Tom Taylor, regular guy, as opposed to Tommy Taylor, Boy Wizard.  What ensues is a great battle with the death of many characters.  It's also a meditation on "story" and how it influences our lives, as much of The Unwritten is.

I was curious how these two stories about "story" would interact, since I read Fables and wasn't aware of any lingering storylines concerning Mister Dark, the villain of this tale.  It appears that these versions of the Fables are from an alternate timeline, where they were unsuccessful in their bid to defeat Mister Dark and his minions.  This allows for several characters to play different roles than they typically do (particularly the family of Snow White and Bigby Wolf), and there are real many characters that experience very real peril that would otherwise not be in those situations.  Tom Taylor's quest was also moved forward (not as much as I had hoped) and it will be interesting to see where it progresses from here in light of what he learned.

I really enjoy both of these series, so it was cool to read a story with the characters interacting.  I highly recommend The Unwritten, and if the Fables appeal to you, jump into their story as well.

I received a preview copy of this book from DC Comics and Netgalley in exchange for an honest review.
Posted by Scott at 7:06 AM