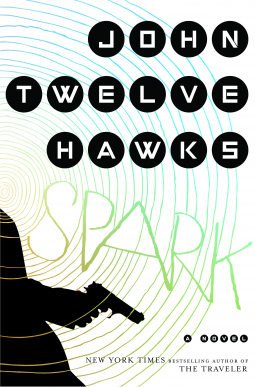 From the publisher: Jacob Underwood is not like other people.


He has Cotard’s Syndrome. He believes he is dead. Which makes his job as a hired assassin neutralising ‘problems’ for DBG, a massive multinational corporation, very simple. He carries out the task – and feels nothing.

Now DBG has such a problem. A key employee, Emily Buchanan, has disappeared, taking with her a fortune and priceless information which could destroy the company. Jacob must track her down. In previous assignments, he had worked with cold logical precision, but this time he has to confront a threat that he first must understand before it destroys him…

I decided to read Spark, by John Twelve Hawks, because the concept really intrigued me: A man (Jacob Underwood) who believed himself to be dead acts as an assassin.  Then he runs into a "client" who challenges his beliefs about the world and himself.  Throw in my prior knowledge of Twelve Hawks anti-establishment/government surveillance ideas and I was pretty sure that this would be a good read.

I was right.  Spark moves along at a fairly decent pace.  The reader is introduced to Jacob Underwood as he is carrying out an assignment.  Because the story is told in first-person, we get a wonderful glimpse into Underwood's mind.  I've got to say, this is what makes the story fascinating.  The plot, which involves Underwood tracking down a bank employee (Emily Buchanan) who has taken some very sensitive and incriminating information (think far-ranging conspiracy theories), is interesting and engaging.  However, it's the ability to see through Underwood's eyes and into his way of thinking that really drives the book.  The plot is pretty standard (maybe a little better than most), but the protagonist is outstanding.  The reader is constantly subjected to Underwood's thoughts about the world, society, existence, and how everything works.  In flashbacks, we come to see just how Underwood went through his "transformation" (Cotard's Syndrome, where people believe they are actually dead) and became the emotionless and efficient killing machine that he is.

I enjoyed reading Spark for the sheer creativeness of the character Jacob Underwood.  I would recommend this novel to people who enjoy conspiracy theory-type thrillers, but I would highly recommend it to anyone looking for one of the most interesting main characters in a long time.

I received a preview copy of this book from Random House and Edelweiss in exchange for an honest review.
Posted by Scott at 6:40 AM