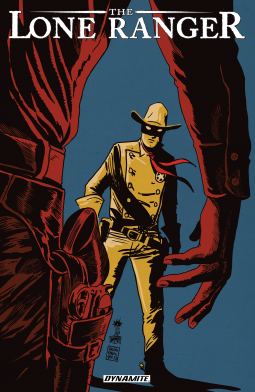 From the publisher: The legend of the Lone Ranger and Tonto lives on, in two-fisted tales from the Old West!

Thrill to the famous masked man's adventures as he avenges the cold-blooded murder of Abilene marshal Tom "Bear River" Smith, rescues a stranded wagon and its precious cargo from a deadly Colorado blizzard, saves an elderly rainmaker from a lynch mob during a season of drought, pursues a high-strung outlaw after a botched bank heist, foils the train robbery by a war-obsessed Chiricahua renegade, and averts the starvation of an Arapaho tribe after pleasure-seekers hunt their only food source — the American buffalo — to near extinction.

Also, Tonto takes center stage in a origin story that proves that a rider is only as good as his horse, as his escape from Fort Garland leads to a fateful first encounter with his trusty stead, Scout.

I have enjoyed the Lone Ranger comics, and the latest collection, Vol. 8, by Ande Parks is no exception.  However, rather than an overarching story that goes throughout the book, this book is made up of several shorter (single issue) stories.  The Lone Ranger, with help from his Indian friend Tonto, investigate the murder of a Texas marshall, Tom Smith.  This was an interesting story, as it appears that the marshall's murder might be based on real events.  Parks offers a change of pace with the story of a family, traveling across the land, who becomes caught in a terrible blizzard.  Tonto and the Lone Ranger venture into the weather to save what they can of the family.  In addition to these stories, there are several other adventures, including helping an Arapaho tribe on the brink of starvation, stopping a train robbery, and tracking a bank robber.

My favorite story in this collection details Tonto's origin. It is an interesting look at how he came to find the Lone Ranger.  It also shows how Tonto and his horse Scout came together.  There is a lot of emotion and background packed into this issue, and is an excellent example of storytelling by Ande Parks.

I would recommend The Lone Ranger Vol. 8 to fans of the character, or those readers looking for some fun western tales.

I received a preview copy of this book from Dynamite Entertainment in exchange for an honest review.
Posted by Scott at 4:15 AM