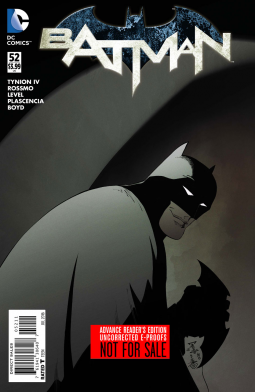 From the publisher: Echoes from Batman's past ripple out into Gotham City's future…

With Batman #52, James Tynion IV does an excellent job of ending this series in preparation for the new Batman series coming out of the DC Rebirth event. He perfectly captures one of those reflective moments that seem to occur every now and then for Bruce Wayne/Batman. In this case, Tynion tells two stories simultaneously: one involves a new villain known as Cryptic, who is a bank robber; while the other details several of the events that built Bruce into Batman. This issue is called "The List", which refers to a list of items that Bruce Wayne created (at the behest of Dr. Thompkins) to help him move past the death of his parents, and the items on that list are what ties the whole issue together.

While I enjoy the brooding, dark stories that often involve Batman, the occasional issues that highlight his joy, motivation, and, for lack of a better term, feelings often result in the most heartfelt stories that really show the depth of character that Bruce Wayne has. This issue is one such story.