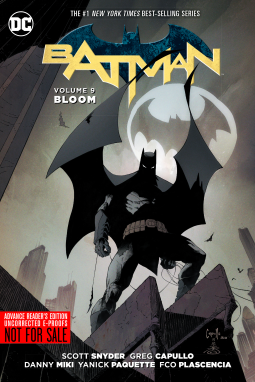 From the publisher: Scott Snyder and Greg Capullo conclude their #1 NEW YORK TIMES best-selling, critically acclaimed saga.
BATMAN RETURNS? Bruce Wayne has a nearly perfect life. He’s in love with an amazing woman and works by her side every day at one of Gotham’s youth centers, helping the children of the city he loves. His memory has been patchy ever since he nearly died in the last Joker attack, but even so, he’s confident that this is the happiest he’s ever been. And yet…he sometimes feels himself being tugged back to another life. In the negative space of his missing past is a half-remembered history, filled with violence and darkness, but also greatness.  The Batman is calling Bruce back. But if he returns to his past, what will become of the perfect, happy life he has built?   Scott Snyder and Greg Capullo’s character-defining run on the Dark Knight demonstrates why Batman truly is forever. Collects BATMAN #46-50, as well as a short story from DETECTIVE COMICS #27.

With Batman Vol. 9: Bloom, Scott Snyder wraps up his long run on Batman, and sets the series up for the Rebirth event. This book is a direct continuation of Batman Vol. 8, with Bruce Wayne still not aware he is Batman, and a villain called Bloom terrorizing Gotham. Additionally, Jim Gordon is operating as Batman, with the assistance of a mechanical Batman suit. The story involves Bruce coming to terms with who he was/is, the fight to stop Bloom, and Duke (a member of the Robins) facing up to the realities of his life.

Snyder has done another wonderful job with Batman. Of particular interest to me was the conflict Bruce Wayne experiences and goes through on his journey back to being Batman. There is a lot of soul searching and sacrifice as Bruce processes this change, and the visuals are a unique way of showing him dealing with all of these issues. Alfred is once again the emotional center of the book, as the reader sees and feels his anguish as his "son" has to sacrifice his happiness once again. I also enjoyed Duke's role in this story, and his interaction with Bruce Wayne and growth as a character should be an interesting thread to follow in future issues.

I have enjoyed Snyder's Batman stories; he has added a lot to the mythology surrounding the character. There is a short tale at the end of this collection that is a perfect little end to his run, as the reader is taken way into the future as the legend of Batman continues to endure.

I highly recommend Batman Vol. 9: Bloom by Scott Snyder. It is a must for Batman fans, and while it is not a great jumping on point, it sets up the new Rebirth storyline well.

I received a preview copy of this book from DC Comics and Netgalley in exchange for an honest review.
Posted by Scott at 6:58 AM