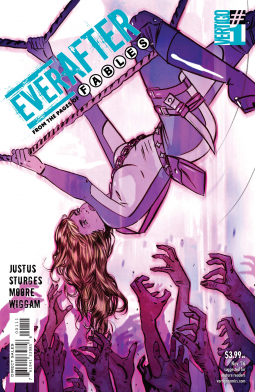 From the publisher: From the team that brought you FABLES: THE WOLF AMONG US comes a new chapter of the FABLES legacy! In a post-Fables world where magic abounds, it can be wielded for the greater good or used to plant the seeds of anarchy and terrorism. The Shadow Players are a global network of agents—both Fable and mundane—tasked with policing a newly enchanted world and protecting humanity from itself. EVERAFTER features the return of series favorites Bo Peep, Peter Piper, Hansel, and Connor Wolf, as well as exciting new characters and a terrifying new villain! Written by FABLES: THE WOLF AMONG US veterans Matthew Sturges and Dave Justus with gorgeous art by Travis Moore (Fables: The Wolf Among Us, JLA All Stars), you won’t want to miss this series that FABLES creator Bill Willingham himself told us we had to get into your hands as quickly as possible!

Dave Justus and Matthew Sturges have done a spectacular job with Everafter: From the Pages of Fables #1. Following on the heels of the events in the final arc of Fables, Everafter picks up with a group of Fables who remained in the mundane world. They have formed a group called the Shadow Players, and are tasked with protecting the world from "new" fables and magic, formed from our new stories.

In this opening to the Pandora Protocol, we find Hansel, Bo Peep, and Peter Piper in the midst of tracking down a dangerous new "package". Meanwhile, Connor Wolf, son of Bigby Wolf and Snow White, has joined the Shadow Players, anxious to use his abilities for good and to find adventure. This opening chapter does a fine job of introducing the main players and setting the stage for the rest of the arc, and future stories still to come.

I was a huge fan of the original Fables series, and Everafter seems to be hitting the same sweet spot. However, instead of the struggle between the various Fable factions, now we get more of a James Bond/Mission Impossible-type story. I'm really looking forward to future installments, and highly recommend this new book. Sturges and Justus have stepped in to a much-beloved world and seem to know exactly how to recapture the magic.

Pick this up if you were a fan of Fables, or you're looking for a twist on the super-spy, action-adventure genre.

I received a preview of this book from DC Comics and Netgalley in exchange for an honest review.
Posted by Scott at 6:23 AM