This past Wednesday was Cami and Griffin's fifth birthday.  It's hard to believe they are five.  Trisha threw a rockin' party while I sat at school for parent/teacher conferences all afternoon and evening.  There were a total of 10 4-5 year olds (with one 3 year old) at our house for three hours.  They ate pizza and cupcakes, jumped on the tramp, played games (pin the treasure on the pirate map; over-under with a ball; etc.), and opened presents.  Cami got lots of neat girly toys and Griffin ended up with action figures and superhero stuff.  Yesterday, Griffin tried on his "Ben 10 watch" which turns Ben 10 into a superhero alien (its a cartoon show).  He turned to Trisha in wonderment that he didn't actually turn into an alien!  Apparently he was okay with the alien part, but didn't quite understand it is just a toy.  Trisha even heard him tell Cami, "It's okay, I didn't turn into an alien."  I'm not sure if he was reassuring her, or just needed to say it out loud to see if anyone cared. Wow.  Today we ran to Toys R Us for the birthday crowns and balloons.  Good times. 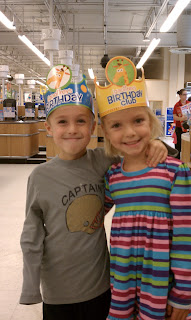