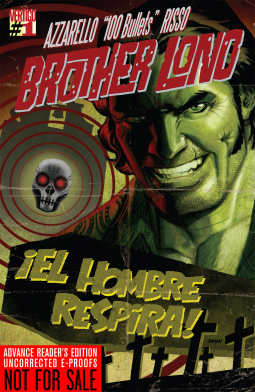 From the publisher: The Eisner award-winning team behind 100 BULLETS-writer Brian Azzarello and artist Eduardo Risso, reunites to tell the story of the baddest Minuteman of all. When last we saw Lono in 100 BULLETS, Dizzy Cordova had shot him through the chest…but Lono always was too tough to die. Now, after the final events of 100 BULLETS, Lono finds himself in Mexico working on the side of the angels.

Collects the entire eight-issue run of this limited series.

Brian Azzarello has written another hard-boiled story with 100 Bullets: Brother Lono.  Initially I thought it would be a continuation of the 100 Bullets series, even though that series seemed to have a pretty thorough ending.  Instead, Azzarello used Lono as a character to tell a different kind of story than the original series.

The story opens in Mexico, where Lono has left behind his violent past, confessed to a priest, and is living at a Catholic church/orphanage.  Unfortunately, the orphanage is in the middle of an area controlled by a vicious drug cartel.  The cartel makes "tithes" or "donations" to the orphanage, giving them a measure of control over the priest running the church.  Throw in a nun, an enforcer, the mysterious Twin Towers who run the cartel, and a former orphan turned cartel member, and there is a huge amount of mayhem and violence.  And this is before Lono gets involved, and get involved he does.

Rather than furthering 100 Bullets, Brother Lono takes on the tradition of stories like The Wild Bunch, The Magnificent Seven, and even some of the Spaghetti westerns of Clint Eastwood.  Lono is a bad guy, but when the orphanage is threatened, he rises to the challenge of defending it.  However, there are some surprises in store for the reader that differentiates it from those previous tales.

As is usual, Eduardo Risso's art adds a noirish element to the story.  He also pulls no punches when it comes to illustrating the violence that occurs.

Azzarello writes a good book with a harsh theme: Sometimes the only way to beat the bad guys is with an even worse guy.

I recommend Brother Lono to fans of Azzarello, 100 Bullets, and The Wild Bunch.