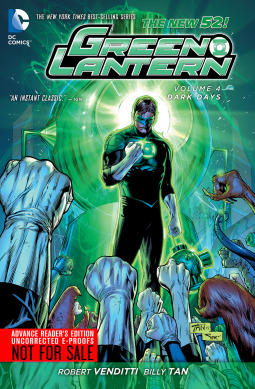 From the publisher: Just as Hal Jordan, John Stewart and Guy Gardner are putting back together the Green Lantern Corps, lights across all of the different colored Corps begin to flicker. Lanterns from all over the universe begin to lose power, but unlike times' past, the reasons for the outage don't seem to be in-fighting between one another. Allying with enemies and friends alike, Hal links the answers to the mysterious alien Relic and their confrontations will leave all the corps forever changed.

Robert Venditti, the new writer for Green Lantern, follows Geoff Johns's long and spectacular run.  Venditti has done a nice job taking the deep myths Johns established and using them to explore even more of the Lanterns' past history and the idea of using the light of the color spectrum as power.

Dark Days introduces us to Relic, a being left over from a reality that was destroyed.  Curiously enough, the end of his universe was caused by the equivalent of the different colored Lanterns in his reality.  Each color is powered by a different emotion, all of which will eventually run out, causing the destruction of reality.  As Relic finds himself in our reality, he decided to continue his "rescue" mission of saving reality the only way he knows how: by destroying as light-users, aka Green, Red, Orange, Blue Lanterns, etc.  It's up to Hal Jordan (recently made the leader of the Green Lanterns) and the rest of his crew, with an assist from Guy Gardner and Kyle Raynor, to stop Relic.

I really liked the added depth the other types of Lanterns brought to the Green Lantern mythos.  Venditti's idea that there is a limited amount of emotion to be drawn upon just adds to the layers of these heroes. The thought that the Green Lanterns need to stop creating constructs in order to save existence is interesting.  Would they still be able to function as heroes without their rings?  Also, what is beyond the wall at the edge of existence?

Venditti has very capably taken Johns's ideas, used them as a stepping-off point, and begun to establish his own voice and concepts in the world of the Green Lanterns.  I'm curious as to where he goes next.  After years with Geoff Johns guiding their adventures, the Green Lanterns are in very good hands with Robert Venditti.  Highly recommended, particularly to established fans.

I received a preview copy of this book from DC Comics in exchange for an honest review.
Posted by Scott at 6:38 AM