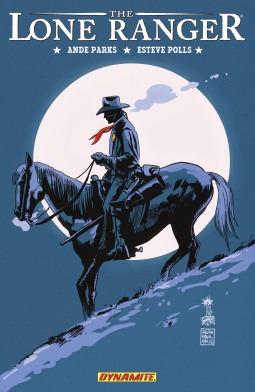 From the publisher: For the first time, the Lone Ranger and Tonto ride off into the sunrise!
Crossing the Mississippi River, the legendary Western heroes pursue the rogue federal agent who betrayed them.

Getting satisfaction proves costly, as neither the Lone Ranger or Tonto are ready for what may be the deadliest setting they've ever faced — the back rooms and hidden agendas of the "civilized" world!

This collection of the Lone Ranger, by Ande Parks, was a new idea I hadn't seen before.  While tracking down the bad guys, the John Reid (the Lone Ranger) and Tonto are led to Chicago. Chicago is where Reid went to college and he has a history in the town.  However, things aren't quite how he remembers them, and soon his vigilante help rubs many residents the wrong way.  In addition, Tonto is the focus of some prejudice and hate from locals.

While not my favorite adventure of the Lone Ranger, this story was a nice change from the constant Old West setting.  It was definitely an insightful look at how the Lone Ranger functions when he is out of his element.

Parks's writing was fine, creating a believable late 1800's Chicago and capturing the honesty, and a little naivete, of John Reid. Esteve Polls artwork was nice.  It added to the story, capturing both the rugged west and the city of Chicago.

Overall, I'd recommend this book for fans of the Lone Ranger and Tonto. It is an interesting episode in their long and storied history.

I received a preview copy of this book from Dynamite in exchange for an honest review.
Posted by Scott at 5:05 AM