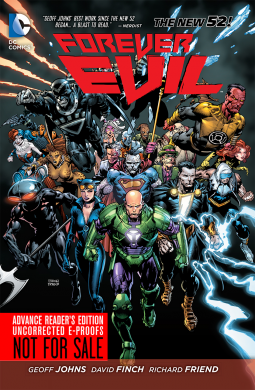 From the publisher: The Justice League is DEAD! And the villains shall INHERIT the Earth! In a flash of light, the world's most powerful heroes vanish as the Crime Syndicate arrives from Earth-3! As this evil version of the Justice League takes over the DC Universe, no one stands in the way of them and complete domination ... no one except for Lex Luthor.

Geoff Johns is the mastermind behind Forever Evil, a story that harkens back to storylines and big events from the late 80's.  Leading out of the events of the Trinity War, Forever Evil picks up with the Justice League missing, the Crime Syndicate (an evil version of the Justice League from an alternate universe) in the midst of conquering Earth, and Lex Luthor leading a rag-tag group of leftover heroes and villains in an effort to reclaim the Earth and defeat the Crime Syndicate.

I enjoyed this story a lot.  It was a nice change to get the majority of the story from Lex's viewpoint, and the dynamic between Luthor and Batman was great.  In addition, Batman's dedication to rescuing Nightwing is a nice development that has spun out of recent events in the Batman books.  There is also a fun supporting cast, in Black Adam, Bizarro, Captain Cold, Catwoman, and a couple of others.  The storytelling is top-notch, with very few problems.

Having read the (in)famous Crisis on Infinte Earths series when it was first released, I enjoyed this more modern take on many of the situations that occured in the story.  I also like how there are multiple threads left to spin into the future.  And as seems to be the case, the resolution of Forever Evil seems to lead right into DC's next major event.

I recommend Forever Evil to DC fans, and to readers who read the original Crisis mini-series.