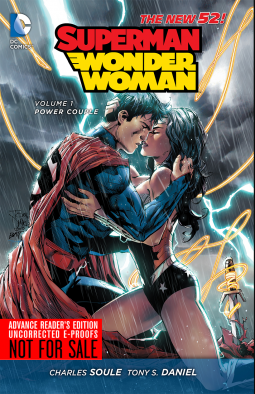 From the publisher: Beginning a bold new series that details the relationship between The Man of Steel and the Warrior Princess as writer Charles Soule (Swamp Thing) is joined by artist Tony S. Daniel (Batman) to tell the tale of a romance that will shake the stars themselves. These two super-beings love each other, but not everyone shares their joy. Some fear it, some test it--and some will try to kill for it. Some say love is a battlefield, but where Superman and Wonder Woman are concerned it spells Doomsday!

Much like the Batman/Superman series, Charles Soule's Superman/Wonder Woman Vol. 1: Power Couple puts it's main focus on the relationship between the heroes, rather than latest villain or threat.  And it works to great effect.  Instead of the typical superhero story, the reader is treated to an exploration of a romantic relationship between to very powerful, yet different, people.

The collection begins with a "date" between Superman and Wonder Woman, and rolls through the introduction of Doomsday, Zod, and Faora into the New 52 universe.  In addition, many of Wonder Woman's half-siblings, aka "gods", make an appearance as well.  In the midst of everything, the love affair between Wonder Woman and Superman becomes public knowledge.  There is some fighting, some vanquishing of evil, and several splash pages, but the heart of this story is in the relationship between Superman and Wonder Woman.

One aspect of this that Soule brings across very well is how Clark Kent (Superman) and Diana Prince (Wonder Woman) were raised very differently.  Clark strives to be normal in his everyday life, keeping his identity as Superman secret.  Consequently, he wants to keep their relationship very hush, hush.  Diana, on the other hand, was raised as an Amazon and taught to be open and proud of who she is.  There is no hiding of anything with her, particularly when she can use the lasso of truth.  She very much wants the relationship out in the open, for all to see.  As they work through their issues over the course of several battles and encounters with gods, they come to a realization that should provide numerous opportunities for stories in the coming issues of the series.

This is a highly entertaining book.  I enjoyed the fresh take on the heroes, and the artwork is spectacular as well.  This is a must read for fans of Superman and Wonder Woman, and I'd recommend it to people looking for a different approach to superhero books, too.