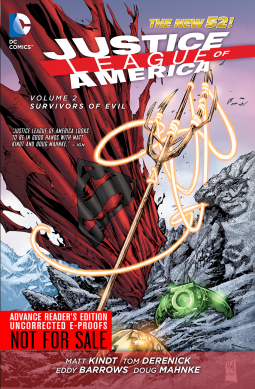 From the publisher: As the smoke clears from the Trinity War, one thing looks disturbingly clear , the members of the Justice League of America are dead, betrayed by one of their own.

But as with the Trinity War, all is not what it seems. Martian Manhunter and Star Girl have lived to fight another day and find themselves trapped on an alien world that is under the control of a group of super-villains. The key to their survival may lie in the hands of the super-villain Despero, but will these heros be able to find it within themselves to trust soemone who is supposed to be their mortal enemy?

Matt Kindt's Justice League of America: Survivors of Evil shows some of the fallout from the Trinity War event, in particular what happened to several heroes, including Superman, a Green Lantern, Flash, Wonder Woman, Firestorm, and Aquaman.  But the interesting part of the storyline is the relationship that is developing between Stargirl and Martian Manhunter.

As Manhunter and Stargirl enter a mysterious prison looking to free the trapped heroes, they are forced to face their own deep secrets and fears.  They also have only each other to rely on.  As a result of events during the rescue attempt, Manhunter's mind is fused with Stargirl's, giving him insight into the young hero as they both confront Despero.

What I really liked about this book was Kindt's examination of Stargirl, particularly how and why she became a hero.  Like many heroes, she has a tragic backstory, but as the past is revealed and she is confronted with her fear, she begins the process of moving on.  Stargirl moves beyond being merely the tentative teenage hero and develops true leadership skills.  It's a good character arc for Stargirl and should lead to some interesting stories.

The last issue in this book deals with the dissolution of the Justice League of America as it was known.  It also sets up the formation of a new team, as Kindt checks in on the various members and their current activities.

I recommend Survivors of Evil to Justice League fans, particularly fans of Stargirl.  It was a good book, revealing more about how a young hero grows into the role.

I received a preview copy of this book from DC Comics and Netgalley in exchange for an honest review.
Posted by Scott at 6:44 AM