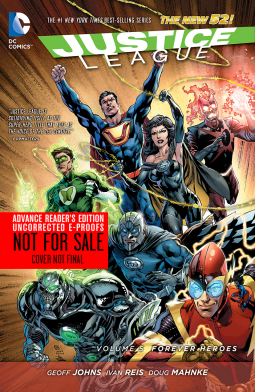 From the publisher: As the Crime Syndicate hunts down the few heroes left foolish enough to challenge them--including Batman's protege, Dick Grayson. But Owlman has other plans for Nightwing...and Owlman's teammate: the most deadly being on the planet: Ultraman! Also, Cyborg is one of the lone Justice League members left to fight against the villains that have taken over. How can he possibly find a way to defeat them? Who can he turn to? Two words: Metal Men!

As a supplemental group of stories to the Forever Evil event, Geoff Johns's Justice League Vol. 5: Forever Heroes works wonderfully.  The individual issues work on their own and dovetail superbly into the greater tale being told in Forever Evil.

The first several issues spend a lot of time focusing on the Crime Syndicate, looking at their backgrounds on Earth-2 either individually or in groups.  This serves to add depth to the characters, and provides some motivations for their actions.  I particularly enjoyed the issue detailing Owlman's origin.  The origin of Grid is also detailed, and I found this helpful because that character just seemed to spring to life with no thought or purpose.  Finding out about his creation filled in some missing holes.  The final issue dealt with Cyborg's reconstruction after Grid split from him, and served to provide an upgrade to the character as well as cap off on of the major sub-plot points of the Forever Evil event.

However, my favorite story was the background of the Metal Men.  Detailing the creation of the Metal Men, this issue was particularly moving, providing some emotional depth to the characters as they receive their first real action in DC's New 52.  There is a lot of potential in these characters, and I look forward to reading future stories about them.

Johns has proven time and again that he can write sprawling stories, and in this collection he shows his skill with the smaller, support pieces.  Forever Heroes is a great book, and does it's job as a tie-in very well; in fact, it is better than most of these types of books, which often seem forced or only distantly related.

I received a preview copy of this book from DC Comics and Netgalley in exchange for an honest review.
Posted by Scott at 6:53 AM