The Royals: Masters of War by Rob Williams - Book Review 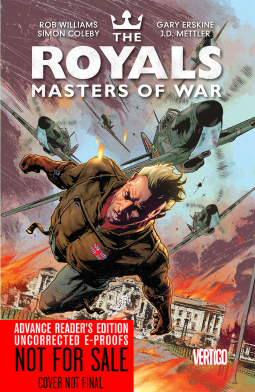 From the publisher: The year is 1940. As the Blitz destroys London and kills thousands, the Royal Family looks on. But in this world, the only people with special abilities are Royalty, and the purer the bloodline, the greater their abilities. So why don't they stop the carnage with their powers? A truce between the Earth's nobles has kept them out of our wars--until now. When England's Prince Henry can take no more and intervenes, will it stop the planet's suffering or take it to another level?

Writer Rob Williams (Judge Dredd: Trifecta, Low Life, ADVENTURES OF SUPERMAN and Daken) and artist Simon Coleby (The Authority, Judge Dredd: Year One and Trifecta) team up to bring you this epic of World War proportions. History will be transformed in a way you've never seen before.

Collects THE ROYALS: MASTERS OF WAR #1-6

The Royals: Masters of War, by Rob Williams, has an astounding concept: The royal families around the world are all gifted with powers or abilities, the strength and type of which vary depending on nationality and purity of blood.  Throw in the setting, mainly England during the early part of World War II (although the time and theater of war does change some) and you've got the ingredients for a very cool new mini-series from DC's Vertigo imprint.

When England's Prince Henry decides to stop the Blitz over Britain, he breaks an old pact between the varying Royal families of the world: Let the commoners fight their wars, while we stay out of it.  Henry's actions have the result of drawing other Royals into the war, especially Japan, which leads to the attack on Pearl Harbor.  Pity the U.S.A.  We have no Royal family, therefore we are left to create our own heroes from our best athletes, to little or no effect.  As the WWII spins on, Henry's actions continue to play a large role.  Meanwhile, his family is falling apart, as their dirty secrets continue to cause friction between them.  As the Hitler's victory nears, the prince is left with a critical decision, one which will have far reaching consequences.

I really liked this story.  Williams does a great job fleshing out Prince Henry, and creates several other intriguing characters in Prince Arthur and Princess Rose.  Even the foreign Royals take on rather unique traits, as evidenced by Emperor Jimmu of Japan and the former Tsar of Russia.  Henry's heroic character arc is worth reading, and the examination of some of the royal family stereotypes played out in those with powers grounds the story in a measure of reality.

Royals: Masters of War is a good read.  I recommend it, especially to those who like a little "alternate" with their history.