Batman and Robin Vol. 3: Death of the Family by Peter Tomasi - Book Review 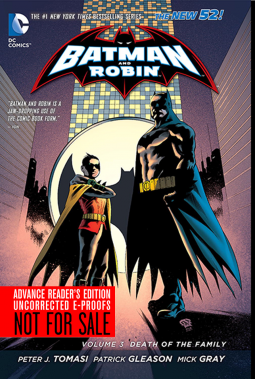 From the publisher: A direct tie to Scott Snyder and Greg Capullo's "Death in the Family" Batman story comes the disturbingly creepy and psychological thriller of Batman and Robin by the all star team of Peter Tomasi and Patrick Gleason.

The Joker returns to test Batman and the extended Bat-family but when he squares off against Batman's son Damian aka Robin! With Batman's life hanging in the balance, The Clown Prince of Crime pushes Robin to his limits and beyond. And with the 300th anniversary of the founding of Gotham approaches, tragedy strikes the Bat-family.


Batman and Robin: Death of the Family, by Peter Tomasi, ties in to the overall Death of the Family story running through the Bat-titles.  In addition to the run-in with Joker, though, are several other episodes.  Most of this book focuses on Damian Wayne, Bruce Wayne’s son and the current Robin.  In one arc, Damian has sent Bruce chasing mementos from his past in order to help him discover more about his parents and childhood. It is a touching story and goes a long way towards developing the father-son relationship between the two. Another arc has a story with Damian and Dick Grayson (Nightwing) dealing with the fall out from Joker's attack on the Bat-family.

From the start, Damian has been a tough character to like.  This volume softens the edges a little and begins to show Damian as a boy yearning for approval and attention from his father beyond what he receives in his role as Robin.  Bruce’s attitude towards him also begins to change, and this character development grounds the story in reality much more than a typical superhero book might be able to do.

I recommend this to Batman, and particularly Damian Wayne, fans.  It will deepen the Death of the Family storyline, and broaden your view of the relationship between Batman and Robin.

I received a preview copy of this book from DC Comics in exchange for an honest review.
Posted by Scott at 6:48 AM