Red Hood and the Outlaws Vol. 3: Death of the Family by Scott Lobdell - Book Review 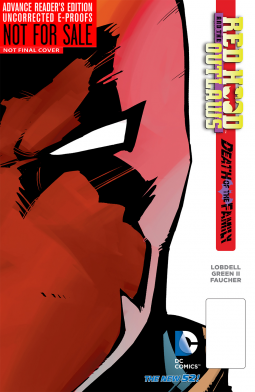 From the publisher: The Joker has returned! A year ago, the Joker had his own face removed and vanished from Gotham City--or so Batman and his allies thought. Surfacing once more, the Clown Prince goes after each member of the Bat-Family and systematically takes them down, leading to a final confrontation that will change the lives of the Dark Knight and his allies forever!

Collects issues #0, 14-17 and TEEN TITANS #15-16.
Red Hood and the Outlaws: Death of the Family, by Scott Lobdell, is the Red Hood (Jason Todd) crossover with the Joker story running through the Bat-titles.  As Joker attempts to separate Batman from his fellow “family members”, Jason and Red Robin (Tim Drake) are captured and confronted by Joker.  This was a very interesting addition to the storyline.  For anyone unfamiliar, Joker killed Jason Todd some time ago.  Jason was returned to life (a story for another time) and is now dealing with the fallout of that experience.  His confrontation with Joker, coupled with a “team-up” with Red Robin provide differing approaches to vengeance.  The #0 issue deals with how Jason Todd became Robin, and the role of Joker in his life up-to and after Jason’s death.  Finally, there is a crossover with Teen Titans, as Arsenal and Starfire search for Jason while the Titans look for Red Robin.  Arsenal is funny, in a slightly chauvinistic but intelligent way, and Starfire is in rebellion against her past (her former incarnation in the "old" DC universe).
I enjoy this title for the more lighthearted approach it takes to the super hero world.  Additionally, Jason Todd could easily become a one-note character, always about revenge and extreme measures of finding justice.  Instead, Lobdell shows Jason becoming a well-developed character, with depths being added constantly.  There is a scene with Bruce and Jason near the end of the collection that illustrates their evolving relationship perfectly.
I highly recommend this to Bat-fans, and to readers looking for something a little less dark and brooding.
I received a preview copy of this book from DC Comics in exchange for an honest review.
Posted by Scott at 5:19 AM