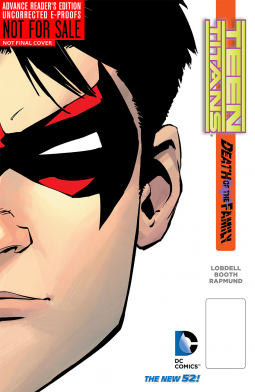 From the publisher: The team is finally reunited in the wake of "DEATH OF THE FAMILY," but something is very wrong with Red Robin! What did The Joker do? As Red Robin's condition worsens he and the team must face an even greater threat when the new Dr. Light is coming for Solstice!

The focal point of the latest collection of Teen Titans by Scott Lobdell is the crossover with the Bat-family of titles, Death of the Family.  Red Robin, along with Red Hood, has been captured by the Joker as part of his plan to "help" Batman.  As a result, the rest of the Titans team up with the Outlaws and Batgirl to try to help save Gotham and bring down the Joker.

The Death of the Family storyline is Joker at his most vile and evil.  It is well done, drawing in all the major players from Batman's extended "family".  With this focus on Red Robin, there is a little more levity to the story without drawing away from the seriousness of what is happening.  Red Robin and Red Hood are forced to confront their role in Batman's life and the consequences of their decision to be heroes.  The interaction between the Outlaws and Titans is incidental to the larger story, for the most part.  However, the collection does close with the Titans moving into a new headquarters and the beginning of a new story with Dr. Light.

One of the highlights of this book is the chapter where the origin of Tim Drake, aka Red Robin, is revealed.  It adds depth to an already interesting character, one who finds balance with the other heroes who used to be Robin.

I would recommend this book to Batman fans, especially to those who want to read the complete Death of the Family storyline.

I received a preview copy of this book from DC Comics in exchange for an honest review.
Posted by Scott at 6:59 AM