Something More Than Night by Ian Tregillis - Book Review 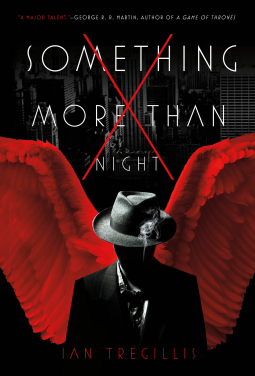 From the publisher: Ian Tregillis's Something More Than Night is a Dashiell Hammett and Raymond Chandler inspired murder mystery set in Thomas Aquinas’s vision of Heaven. It’s a noir detective story starring fallen angels, the heavenly choir, nightclub stigmatics, a priest with a dirty secret, a femme fatale, and the Voice of God.


Somebody has murdered the angel Gabriel. Worse, the Jericho Trumpet has gone missing, putting Heaven on the brink of a truly cosmic crisis. But the twisty plot that unfolds from the murder investigation leads to something much bigger: a con job one billion years in the making.

Because this is no mere murder. A small band of angels has decided to break out of heaven, but they need a human patsy to make their plan work.

Much of the story is told from the point of view of Bayliss, a cynical fallen angel who has modeled himself on Philip Marlowe. The yarn he spins follows the progression of a Marlowe novel—the mysterious dame who needs his help, getting grilled by the bulls, finding a stiff, getting slipped a mickey.

Angels and gunsels, dames with eyes like fire, and a grand maguffin, Something More Than Night is a murder mystery for the cosmos.

Bayliss is an angel with a Philip Marlowe fixation.  He's sent to find a replacement for the arch-angel Gabriel, who has been murdered.  His attempts to choose a mortal go haywire and he ends up with Molly.  Things kind of ramp up from there, as Molly attempts to reconcile her fate and help Bayliss figure out who killed Gabriel and why.  At the risk of creating any spoilers, I'll refrain from anymore plot summary.

This was a very interesting book, and I found myself getting caught up in trying to figure out the whole twisty mess.  The characters were engaging enough to keep me wanting to know more about them and caring what happened to them.  The setting was definitely unique, as a large portion of the story took place in the Pleroma, a not-quite-heaven where the angels live.  Bayliss is a great unreliable narrator, sliding into the noir model very well.  As the publishers description states, the maguffin is grand and the payoff to the story is well worth it.

I did find some of the slang and physics descriptions a little distracting, but not enough to keep me from reading on.

Overall, this was a good book.  It wasn't exactly my cup of tea, but it was definitely unique. Props to Tregillis for trying something new, different and clever.  If your a fan of Tregillis's writing, or like a new spin on old noir favorites, then definitely check out Something More Than Night.

I received a preview copy of this book from Macmillan-Tor/Forge in exchange for an honest review.
Posted by Scott at 8:18 AM