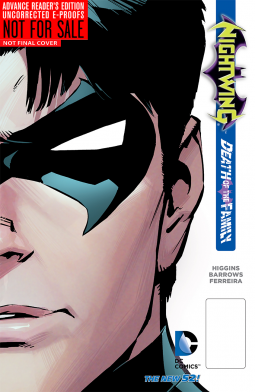 From the publisher: After having his face sliced off one year ago, the Joker makes his horrifying return to Gotham City! But even for man who's committed a lifetime of murder, he's more dangerous than ever before. The Joker sets his twisted sights on the members of the Bat-Family and attacks them all where it hurts—and for Dick Grayson, that means going after the family he's built up for the past year at Haly's Circus!
Kyle Higgins’s Nightwing Vol. 3: Death of the Family is a crossover with the Joker story running through the Bat-titles.  Nightwing (Dick Grayson) has sunk his life-savings into building a home for Haly’s Circus at a renovated amusement park.  But Joker has other plans.  He intends to use Dick’s friends to break him down and punish him.  Why? Because Joker believes Dick (and the other members of the Bat-Family) are preventing Batman from reaching his potential.
I really enjoy Nightwing; he’s my favorite of the heroes surrounding Batman.  He is the more hopeful face to Batman’s cynicism and darkness.  But lately, Nightwing has been going through a lot and is beginning to lose some of his optimism.  There is a poignant scene with Robin (Damian Wayne) that perfectly encapsulates Dick Grayson and shows how he balances Batman.  The scene is all the more moving in light of recent developments with Damian, and the resulting story is very moving and well done.  Higgins has really added emotional depth to Dick Grayson’s character.
This is a collection for Dick Grayson fans, and for those looking to read the complete Death of the Family storyline.  I highly recommend it.
I received a preview copy of this book from DC Comics in exchange for an honest review.
Posted by Scott at 6:37 AM