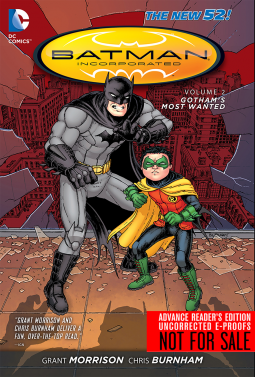 From the publisher: Years of epic storylines converge as Batman Incorporated battles Talia and Leviathan for the very soul of Gotham City!

Tragedy and triumph are the hallmarks of the second volume of Grant Morrison's epic Batman Incorporated. Batman and his allies must strengthen their resolve as Leviathan moves to take Gotham City. Everything since Batman Incorporated #1 has been leading to this!

Grant Morrison wraps up his years of writing various Batman titles with the story told in Batman Incorporated Vol. 2: Gotham's Most Wanted.  Bruce Wayne (Batman) and his son Damian (Robin) are in the final showdown with Damian's mother, Talia Al Ghul and her criminal organization Leviathan.  With Gotham held hostage, Batman is forced into a tragic showdown with Talia. Meanwhile, the other members of Batman, Inc. are in battles of their own.  Without revealing spoilers, this story contains some life-altering events for several members of Batman's team.  It is a superb story, and a great pay-off to fans who have followed Morrison's run.  Seeds that were planted years ago come to fruition.  I'm really looking forward to seeing how Batman and his group move forward in future stories.

Along with the main storyline, this collection includes several back-up features starring various members of Batman, Inc.  They are okay, but not necessary to understand the overall story arc.

I highly recommend Gotham's Most Wanted.