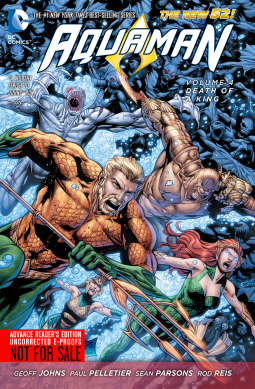 From the publisher: Unfolding out of the events of "THRONE OF ATLANTIS" comes a mystery that sends Aquaman to the ends of the Earth to solve an ancient murder--one that will reveal a horrific truth about Arthur Curry and threaten those closest to him today.

Also, as the Scavenger compiles more Atlantean weaponry and artifacts, Aquaman enlists the aid of The Others to help find one missing relic in the Southwestern United States before his enemies can get to it and possess untold power.

Much like he did with Green Lantern and The Flash, Geoff Johns has taken Aquaman (a character who was often the butt of jokes) and created a rich and interesting mythology for him.  Death of a King is the final collection of Johns's run on Aquaman, and he finishes with a flourish.

As Arthur Curry comes to accept his role as Aquaman and the King of Atlantis, he discovers that what he thought he knew about himself is only part of the story.  As storylines concerning Mera, the Scavenger, the Others, the Bermuda Triangle, and an ancient king of Atlantis all come together,we are given a much deeper view of the the history of Atlantis and Aquaman's place in the world.  It is an interesting story and sets the stage for future writers to have a new springboard in expanding the undersea world.

I'm not a huge Aquaman fan, but I do enjoy Geoff Johns's writing, and I was not let down.  A second tier character was brought to the forefront, and Aquaman now has his own "world" to interact with, beyond just "talking" to fish and fighting Black Manta.  Death of King wraps up what Johns started nicely, and I was pleased with the resolution to the story.  I would recommend this collection to fans of both Aquaman and Geoff Johns.