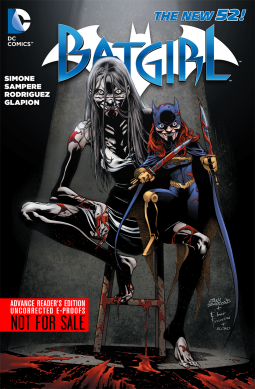 From the publisher: Batgirl struggles to continue fighting crime after being emotionally drained by the death of her brother, James, Jr. With her relationships with Batman and her father strained, Batgirl face one of Batman's most ruthless villains, The Ventriloquist, alone.

Wanted, the fourth volume of Batgirl, is fantastic. Gail Simone is writing one of the most complicated characters in the DC universe right now.  In a previous story, Barbara Gordon killed her psychopatic brother, with her father, Police Commissioner James Gordon, looking on.  This collection has Barbara dealing with the very real fallout of her actions.  She is pulling away from the Bat-Family, she is wanted for murder by her father (in her Batgirl persona), and she is struggling with whether she wants to continue her costumed life.  The only bright spots are her roommate and her new boyfriend, Ricky (who's brother is a gang banger).

Into this mix is thrown the Ventriloquist, a new take on a cheesy old villain.  The new Ventriloquist is a very disturbed young lady with a penchant for killing people. Her backstory is creepy and her constant need to perform for an "audience" is disturbing.  In addition to this new villain, Knightfall and the Disgraced are continuing to eliminate gangs in an effort to "clean up" Gotham.  However, Knightfall's personal concerns lead to a showdown between Batgirl, Commissioner Gordon, Ricky, and the Disgraced that should have far-reaching consequences for all involved. There is also a nice story from Barbara's past that shows her early leanings toward heroism.

The thing I'm currently enjoying about Batgirl is Simone's examination of the realities of being a costumed hero, and the toll it takes on their lives.  Guilt, fear, anger, and sorrow are dealt with in a realistic manner, not simply swept under the rug as the next villain raises their head.  This brings a refreshing, if sometimes bleak, feel to Batgirl's story.  However, Simone makes sure to include a touch of hope to provide a light at the end of the tunnel.

Batgirl is one of the best books out there, and I highly recommend this volume to any Bat-fans, or comic readers in general.