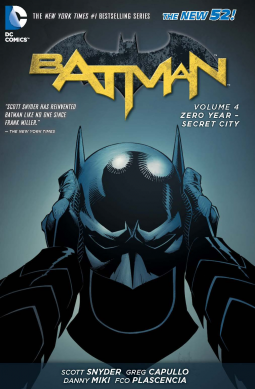 From the publisher: The fourth volume in Scott Snyder and Greg Capullo's best-selling run on Batman!

Still dealing with the death of his son and the aftermath of Death of the Family, Batman must stop a robbery by Bruce Wayne? Twists and turns are around every corner as Bruce must clear his name and stop this mysterious perpetrator, all leading to the epic "Zero Year."

With Batman Vol. 4: Zero Year, Scott Snyder continues his fantastic run.  This book contains Secret City, the first part of the Zero Year event, a retelling of sorts of Bruce Wayne's first year as Batman.  To be clear, this is not an update of Frank Miller's classic Batman: Year One, nor is it simply a new origin story.  It is a look at how Bruce became, and grew into the role of, Batman.

This initial story concerns Bruce's return to Gotham after being away for quite some time, long enough for his uncle to declare him legally dead.  The Red Hood Gang is terrorizing the city, particularly businessmen who won't fall in with them.  As Bruce, in disguise, continues to confront the mysterious Red Hood One to try and take him down, Red Hood finds himself very intrigued with this new vigilante.  Throw in Bruce's reluctance to go public with his return and his lack of wanting to run Wayne Industries and take over for his uncle into the mix, and there is a very interesting mix of events occurring in Bruce Wayne's life.  As everything comes to a boil, there is a climactic confrontation at the ACE Chemical plant that is especially meaningful for long-time Batman readers.

In addition to this main story, there are several short episodes revealing some of the training Bruce Wayne went through on his journey to becoming Batman.  There is also a short appearance by Edward Nygma that leads into the second half of the Zero Year story, Dark City.

I really enjoyed Synder's take on Batman's first year.  It was a fresh view on his first adventure, both echoing earlier stories and adding something new.  There were also several easter eggs for careful readers and dedicated fans to pick up on, which brought the story firmly into the Batman mythos.  Synder has proven to be excellent at the characterization of Batman and he is definitely placing himself in the upper tier of Batman writers. I highly recommend this book.