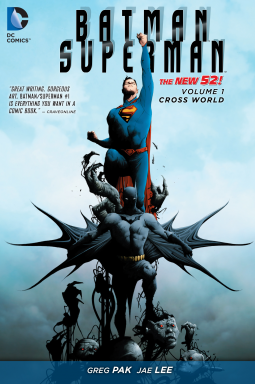 From the publisher: The Dark Knight and the Man of Steel are close friends in the modern day--but the two weren't always such close allies. Discover how two of the World's Finest Super Heroes met for the first time in the New 52, and the mysterious adventure that takes them to a whole new world-the world of Earth 2! The heroes of the main DC Universe meet their Earth 2 counterparts for the first time!
Collects Batman/Superman #1-4 and Justice League #23.1: Darkseid

Batman/Superman, by Greg Pak, is awesome.  There, I said it.  I'm not a huge Superman fan (he's okay), but Batman is my favorite.  As such, I do enjoy reading about The Dark Knight teaming up with the Man of Steel.  This particular collection is no exception.

Cross World contains the first meeting of Batman and Superman in the continuity of DC's New 52 reboot. Superman is young and brash; Batman is still highly suspicious of everyone, not wanting to trust in any help. As Batman investigates the murder of Wayne Tech employees in Metropolis, he comes in contact with Catwoman, who is possessed by Kaiyo, the Chaos Bringer .  This results in a run-in with Superman, where-in Kaiyo teleports the two heroes to Earth-2.  There, they come in to contact with the Superman and Batman of that world, who are older, wiser, and married.  The world is cleaner and safer, but there is a major weapon hiding beneath the surface of the peaceful appearance.  As the heroes battle and work together to defeat Kaiyo, they are warned that Darkseid is coming.

I love the interaction between Batman and Superman.  They are such different men with different views on the world.  The contrast between them results in a strong friendship, as well as great stories.  When they are thrown into the alternate Earth-2 and meet their counterparts, the contrasts only deepen and add to the overall relationship between the heroes.  Pak does a phenomenal job with this element, which is the key to all good Batman/Superman stories.

My favorite part of this book has to be the background given on the Batman and Superman of Earth-2. Their friendship dates back to their youth, and their first meaning is a touching scene between to boys with very different backgrounds, who's strengths complement each other beautifully.

I would be remiss if I didn't mention the art by Jae Lee.  It is gorgeous, almost cinematic, and goes perfectly with the story.  Lee has a rather unique style which is easy to identify.  That style if the ideal match for Pak's tale of the meeting of two of the biggest superheroes in the world.

In addition to the main story, which actually serves as a prequel of sorts to the Earth-2 series, the collection includes Justice League 23.1. This story serves as the origin of Darkseid, one of the most ruthless and powerful villains in the DC Universe.  I found it interesting, as I've never read an origin story for the character before.

I highly recommend this book. If you have a passing interest in either Batman or Superman, you would be doing yourself a favor by checking it out.