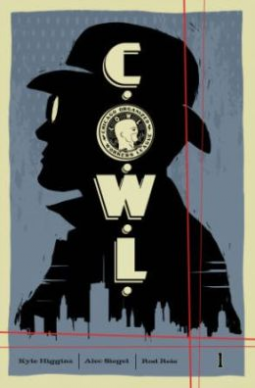 From the publisher: Welcome to the “Chicago Organized Workers League”- the world's first Super-Hero Labor Union!


While C.O.W.L. once stood as a beacon of hope against an epidemic of organized crime and an unbeatable “brotherhood” of Super-Villains, the union now faces its fiercest foe yet-a disillusioned public.

In targeting the last of the great villains, C.O.W.L. attempts to prove its value to the world and to each other, while staving off villainy from both outside and inside its offices.

I really enjoyed C.O.W.L. Vol. 1: Principles of Power by Kyle Higgins.  It was interesting and different from the norm.  C.O.W.L. is the story of the Chicago Organized Workers League, a labor union for superheroes.  It is set during 1962 and concerns C.O.W.L.'s attempt to negotiate a new contract with Mayor Daley and the city of Chicago, now that the Chicago Six are all out of action.  Along the way, a cover-up or conspiracy is discovered by one member of C.O.W.L.  Additionally, the history of the union is briefly shown, as well as the lives of a core group of heroes, warts included.  There are a number of characters, a few whom are hard to tell apart.  Not much time is spent with any one character, but the seeds are laid for future character growth.

Much like Watchmen is a story that uses superheroes to comment on society, C.O.W.L. appears to be doing something similar.  Looking at labor unrest, the changing society, racial inequality, and sexism are all touched on in this opening chapter to the C.O.W.L. story.  I'm very interested to see how the story progresses in future volumes, and highly recommend it to readers looking for a different type of superhero story.  One word of caution: the language can be a bit salty and there are several situations that are very much intended for adults.  This is not a book for children or young teens.

I received a preview copy of this book from Image Comics and Netgalley in exchange for an honest review.