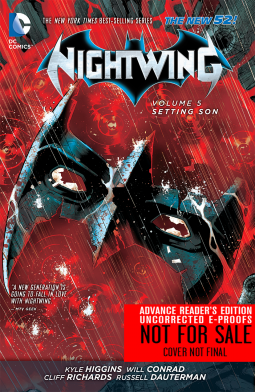 From the publisher: Even though Nightwing has relocated to Chicago, the ghosts of Gotham City won't let him be. An old friend, the Mad Hatter visits his new found home, forcing Nightwing into an uneasy alliance with the mysterious Marionette. With Nightwing trying to establish a new life in Chicago, his sins from his past will come back to haunt him unless he can make peace with his old life.

Kyle Higgins's Nightwing Vol. 5: Setting Son is the last volume of the Nightwing series in its current form.  It collects several stories detailing Dick Grayson's life in Chicago and some of the adventures he has there involving Mad Hatter and the killer Zsasz.  In addition, there is a story from the Zero Year event, before Dick became Robin/Nightwing.  This is an interesting look at a young man who was very full of himself and ego driven, a far cry from the man he would become.  There is also a nice story involving Dick's last days in Gotham, and a wrap-up of his relationship will they/won't they with Barbara Gordon aka Batgirl.  The heart of all these tales is in the daily life and relationships that Dick Grayson has.  The Nightwing series has always been about more than just crime fighting, and Higgins does a fantastic job in capturing that spirit.

Nightwing has also been about change and growing up, and the final story in this collection reflects that perfectly.  During the Forever Evil story, Nightwing was captured by the Crime Syndicate and unmasked as Dick Grayson for everyone to see.  He was then killed and brought back, but as far as the world at large (and everyone but Batman and a select few others) is concerned, Dick Grayson is dead.  In his touching, but vicious, way, Batman pushes Dick and gives him a new challenge: Let the world keep thinking you are dead, and fight the fights no one else can.  This story acts as a springboard into the next iteration of Dick Grayson/Nightwing's life, and transitions into the new series Grayson.

I have always enjoyed Nightwing and highly recommend this collection, particularly to fans who have read the previous four volumes.