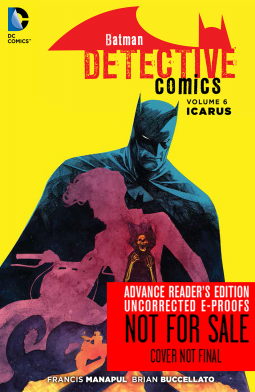 From the publisher: A bold new direction for DETECTIVE COMICS as THE FLASH creative team of Francis Manapul and Brian Buccellato take over the creative reins! Batman finds himself knee-deep in a new mystery involving a deadly new narcotic that has hit the streets of Gotham City. Can the Dark Knight stop the threat before the entire town finds itself embroiled in a deadly gang war that could burn everything--and everyone--down to the ground?

The latest collection of Detective Comics, Icarus, pulls the focus away from "super" villains and moves more towards the actual detective side of Batman. This isn't necessarily better, its just a nice change. Francis Manapul opens his run with the tale of a new drug, called "Icarus", and the battle to get it on the street. It involves rival gangs, human trafficking, a new gang boss (the Squid), a vengeful Harvey Bullock, and Bruce Wayne pledging to clean up the east end docks and warehouses by putting in affordable housing.  Wayne is encouraged by Elena Aguila, a wealthy woman inspired by Bruce himself.  What follows is a story of decisions and their consequences.

After such a focus on the big picture in the Batman comics, particularly the death of Damien Wayne, it's nice to draw the focus in tighter and allow Batman to put his "world's greatest detective" skills to work. Icarus is a good story that does a nice job of helping Manapul get his "Batman" legs.

The art, by Brian Buccellato, is dark and moody, perfectly fitting the story. I enjoy it when the story is complemented so well by the artwork.

I recommend Detective Comics Vol. 6: Icarus to all Batman fans. It also works well as a jumping on point for new readers.