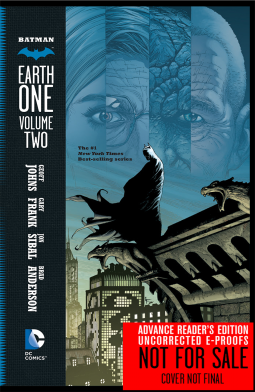 The Riddler has arrived in Gotham and he’s terrorizing the city with his own twisted brand of anarchy. But why is he attacking now, and what is his endgame? The Riddler isn’t Batman’s only problem, as Killer Croc is on the streets and his violent crimes can’t be ignored. Meanwhile, the Dark Knight has trouble reconciling the increasingly conflicting ideologies of Alfred Pennyworth and James Gordon in this gripping re-imagining of the Batman mythology.

Writer Geoff Johns and artist Gary Frank bring you Batman as you’ve never seen him before in this thrilling original graphic novel that continues their unique take on the Dark Knight.

As a Batman fan, I'm willing (and usually anxious) to read any of the different spins on Batman. I enjoyed the first volume of Geoff Johns's Batman: Earth One, and looked forward to reading more. The Earth One concept keeps enough of the original concept to be familiar, but gives the writer more room to play and experiment, particularly with consequences.  Batman falls right in line with this.

In the latest volume, Bruce Wayne/Batman is trying to catch the Riddler, a particularly vicious villain who is killing Gotham citizens at random. Throw Killer Croc into the mix, along with James Gordon and a slightly less passive Alfred Pennyworth, and Johns continues to create an interesting take on Batman.

Too often, the Riddler is portrayed as a joke, but in Batman: Earth One, he is a cold-blooded killer. It puts more of a desperation into Batman's hunt for him. Gordan and Harvey Bullock are also under pressure, both to catch the killer and for working with Batman. This makes for a good mix and propels the story along.

I enjoy Batman the most out of the Earth One series, and will continue to read them as future volumes come out.

Johns has done a nice job, and while I prefer the mainstream Batman, Earth One is a fun take on the character. I would recommend it to Batman fans, or comic fans looking for a different take on an iconic character.