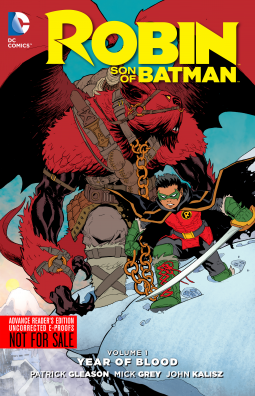 From the publisher: In the wake of the death of his son Damian, Batman is in danger of losing his humanity. However, the foes of this grief-ridden Dark Knight mean to strike him when he's at his weakest. Has Batman's worst foe become... Bruce Wayne?

Plus, three pivotal chapters from the epic ZERO YEAR storyline! From the critically acclaimed, New York Times #1 best-selling creative team of Scott Snyder and Greg Capullo comes the next genre-defining graphic novel in their monumental run.

Batman Vol. 6: Graveyard Shift is the newest collection of Batman comics by Scott Snyder. It is kind of a hodge podge of stories, as it collects various issues that ran between more major storylines.

There is a tie in to the Zero Year storyline, focusing on the early career of Bruce Wayne as Batman. It's a nice, complementary story that adds to the overall arc of Zero Year.

The central part of this book deals with Batman's grief over the death of his son, Damien. He is angrier and more violent. When a teenage girl named Harper attempts to join in his crusade, Batman chases her off. The introduction of Harper lets Snyder show Bruce grieving but giving him a new hope, as well. Harper balances out the rage, and helps temper the grief, as well. The stage seems like it is being set to introduce a new potential sidekick.

Other stories include a fun team-up between Batman and Superman, dealing with a supernatural foe. The friendship of the two heroes is front and center. Batman spends a night in Arkham Asylum, testing the security. During his "escape", he encounters the longest tenured patient in the facility. Selena Kyle, recently become a crime boss, reveals her new nature to Batman in yet another interesting tale.

Overall, I really enjoyed this collection. Snyder's Batman Vol. 6: Graveyard Shift does a nice job filling in holes and laying the foundation for future Batman stories. I highly recommend it.

I received a preview copy of this book from DC Comics in exchange for an honest review.
Posted by Scott at 6:28 AM