End of School and Games 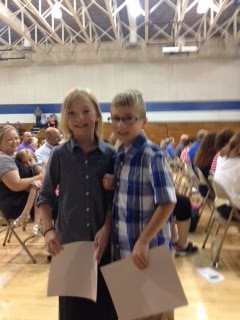 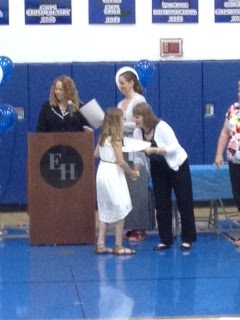 Griffin and Cami celebrated the end of 2nd grade, receiving their certificates of completion. Lexi "graduated" from 5th grade and will be moving into the middle school next year.

Griffin had one game this week (a loss) and was unable to get a hit. However, he did reach base on a walk and a dropped third strike, so he was able to run the bases a little. He also saw a little action at 3rd base. He has a tournament game (possibly two) this week, and then the season is over.

Cami had a game (also a loss) and got two hits, scoring once. She had a lot of action at shortstop and 3rd base, and is working hard on her fielding. She has two games this week, and then a tournament next week.

Also, the girls have several camps this week. Lexi will be keeping busy with basketball and tennis, while Cami will be attending tennis camp after going to basketball last week.

The summer is starting in full swing!