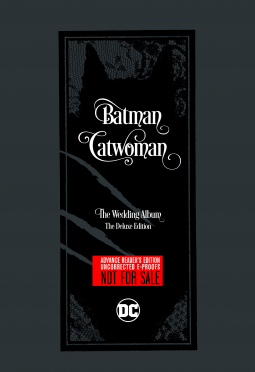 From the publisher: It's the marriage of Batman and Catwoman! The wedding of the century is commemorated here in Batman/Catwoman: The Wedding Album, a special collector's item hardcover in designed packaging!

The historic wedding of Batman and Catwoman is commemorated in this must-have collector's item, featuring never-before-seen photos from the wedding album, behind-the-scenes design sketches and variant covers.

First, I want to be clear: Batman/Catwoman: The Wedding Album by Tom King is not a collected edition of all the issues leading up to the wedding. I would guess that will be done in a different compilation. Rather, this book has a couple of stories that highlight the Batman/Catwoman relationship, hitting some important relationship high points, and then it finishes with Batman #50, the wedding issue.

The first story in this book focuses on Batman and Gotham Girl, with a juxtaposition of Batman and Catwoman. The issue is basically a discussion about why a person chooses to be a hero, and if they can make that choice and be happy in their private life as well. Bruce Wayne/Batman makes a realization that helps him make an important choice regarding Selina Kyle/Catwoman.

The next story focuses on Selina. In what appears to be Selina reverting to her old cat-burglar ways, she sneaks out from a night with Bruce, but winds up making a trip to a wedding dress store. As any married woman will tell you, picking the right dress is a very important step in getting married. I think Selina would concur.

The best part of these two stories is Tom King's focus on the personalities of Bruce and Selina. Instead of putting the "super" part in the forefront, we get a look at what an ordinary life might be like for these two. I have really enjoyed King's examination of Bruce and Selina as people, and not just Batman and Catwoman.

The final story is the wedding. There are multiple threads coming together here, and King makes the decision to tell this story through letters. It adds a personal dimension and puts us in the heads of Bruce and Selina. That adds weight to the story, allowing the reader to experience the emotions that the characters are feeling. It makes for a terrific read.

The rest of The Wedding Album (probably around a third of the book) is variant covers and pin-up tributes from a variety of artists. Each picture portrays Batman and/or Catwoman in a scene from their long history together, both as a couple and as adversaries. Much of the artwork is amazing, with quite a few being worthy of the poster treatment.

Overall, I'm a fan of Tom King's work on Batman. The Wedding Album is no different; the story of Batman and Catwoman getting to the altar is wonderful storytelling. However, I have one caution with this book. It is light on story and heavy on extras. Obviously, this book is for Batman fans, and I would recommend it as such. But, if you're not a fan of extras or want more story value for your dollar, I would hold off.

I received a preview copy of this book from DC Comics in exchange for an honest review.
Posted by Scott at 6:24 AM