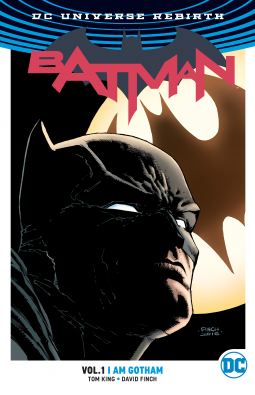 From the publisher: A part of DC Universe: Rebirth! "I AM GOTHAM"

The Caped Crusader has never been stopped. Not by the Joker. Not by Two-Face. Not even by the entire Justice League. But now, in the wake of DC UNIVERSE: REBIRTH, Batman must face his most challenging foe ever--a hero who wants to save Gotham...from the Batman!

From one of the biggest breakout writers in years and former CIA analyst, Tom King (GRAYSON, THE SHERIFF OF BABYLON) and superstar artist David Finch present BATMAN VOL. 1! Collects BATMAN: REBIRTH #1 and BATMAN #1-6.

Batman Vol. 1: I Am Gotham, by Tom King, is the first Batman arc after the Rebirth event. Because the New 52 didn’t drastically change the character of Batman, there isn’t a huge shift in this version. In fact, a most, if not all, of Scott Snyder’s run is still valid, which is nice for long-time readers.

I Am Gotham details Batman’s discovery that there are two new heroes, Gotham and Gotham Girl, working to protect the city of Gotham. It follows his attempts to guide them through their learning curves, while still trying to stop a rash of suicide bombings in which the trigger-men warn “The monster men are coming” before detonating. King provides an origin story for the heroes that echoes Batman’s, with a few crucial differences. Meanwhile, Hugo Strange and the Psycho Pirate are on the loose and causing havoc. This combination has a lot of potential, due to Strange’s manipulative nature and Psycho Pirate’s control of emotions. Ultimately, I Am Gotham is a tragic story that lays the groundwork for King’s run on Batman, allowing him to carve his own take on the character in the wake of Snyder’s epic run.

One of the subplots that I really enjoyed is Bruce Wayne’s approach to Duke Thomas, a young man who was acting as one of a group of Robins. As a result of the fallout from an attack by the Joker, Duke is brought in to contact with Bruce and learns he is Batman. King’s approach to this relationship allows Bruce to take on a new partner without it being yet another Robin, and I’m really interested to see how this develops in future story arcs. There is also an undercurrent of Bruce dealing with his mortality, and what that means for his “family”, as a result of the trauma of his last encounter with the Joker. This lends itself to some intriguing storylines, as well.

Overall, Batman Vol. 1: I Am Gotham is a terrific start to Tom King’s run on this title, and a fine way to begin the Rebirth era of Batman. I highly recommend it to Batman fans. It’s also a great jumping on point for new readers.