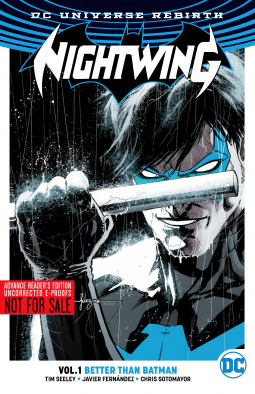 From the publisher: Nightwing is back...in blue!

He's been Robin, he's been a super spy, a ghost. Now, Dick Grayson finds himself back in Gotham City fighting to reclaim the life that was taken from him. But when a new evil threatens those closest to Dick, as Nightwing he must once again choose whether or not to tear himself away from his home in order to combat this dark force.

Everything Dick thought he knew about being Nightwing will be brought to bear, and his relationship to his former mentor Batman will be put to the test in NIGHTWING: VOL. ! written by Tim Seeley (GRAYSON) with art by Yanick Paquette (SWAMP THING, BATMAN/SUPERMAN) and rising star Javier Fernandez (RED HOOD/ARSENAL). Collects NIGHTWING: REBIRTH #1 and NIGHTWING #1-4,7-8.

As a long-time fan of Nightwing, I was happy to read Nightwing Vol. 1: Better Than Batman, by Tim Seeley, the first collection of Nightwing as part of the Rebirth event. During the New 52, Dick Grayson underwent a lot of changes, being thought dead by the public, losing his Nightwing persona, and joining the (somewhat questionable) spy organization Spyral. While I enjoyed those stories, I've always been a fan of Nightwing's superhero adventures, as Dick Grayson has always been a happier version of Batman.

In Better Than Batman, Seeley returns Dick Grayson to Nightwing, but with a twist: Instead of being undercover in Spyral, he is now undercover (of sorts) in the Court of Owls. While working from the inside to bring down the Owls, Nightwing is sadled with a new partner/mentor, Raptor. Raptor is there to make sure Nightwing's morals don't prevent him from accomplishing the goals of the Court of Owls. As the story progresses, with several cameos by other members of the Bat-Family, it becomes clear that there is something more to Raptor than was originally thought.

I really enjoyed this return to Nightwing, and found Seeley's story entertaining. While still loosely working with his former comrades in Spyral, Nightwing is also able to be more superhero-ish. Seeley does a fine job of continuing the natural evolution of Dick Grayson/Nightwing that he began with the previous Grayson series. At the same time, he found a way to add to Nightwing's history in a way that seems organic, and doesn't feel like it retcons any of the things readers love about how Dick Grayson became Robin and then Nightwing. The characterization is great and the story is engaging.

A quick note: Issues 5-6 of Nightwing are not part of this collection, as they are part of the Batman - Monster Men storyline. This doesn't affect the flow of the story; however, due to events in Detective Comics, there are some unexplained references to Tim Drake that some readers may find confusing.

Overall, I enjoyed Tim Seeley's first Rebirth: Nightwing collection, Better Than Batman. It is great to see Grayson back in his Nightwing costume, and to have more of a superhero feel back in his book. I highly recommend this to fans of Nightwing, and it is a fine jumping-on point for new readers. I look forward to discovering where Seeley takes Nightwing from here.